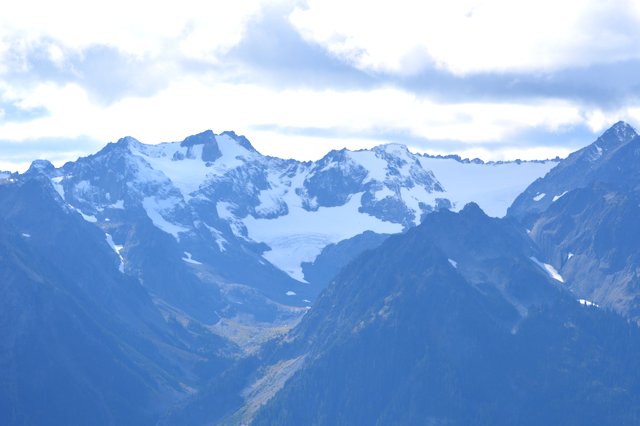 We were in Chimacum on the Olympic Peninsula of Washington for a week, and that gave us time to take a few drives to see the peninsula. I had hoped to see lots of shoreline, but we found that much of the shoreline around the peninsula is either private houses or very primitive with dirt roads and some of the roads are only passable at low tide (yipes!). Also, to drive the loop highway that encircles the peninsula would take over 12 hours!

So, instead we went to a few specific spots. One was the Hurrican Ridge Visitors Center which is near the center area of the peninsula and is ringed with high mountains! The visitors center was at about a mile high, and several of the mountains are in the 6,000 ft range. One, Mount Olympus, is over 7,000 feet high! Some of the higher mountaintops are covered in glaciers, which we were surprised to see so close to the ocean.

We learned that the peninsula is separated into three distinct climate areas. The first is the western slopes of the mountains which is rain forest. The mountains are so high that they stop many of the rain clouds, so all the rain falls on the western side giving that area over 13 inches of rain annually. The eastern slopes of the mountains and the eastern area are quite dry and while there are pine and spruce trees, the farmers have to irrigate.

The third is the mountain area itself, with glaciers and alpine meadows. Really beautiful.

It was cool on the Olympic Peninsula, so on our drive to the Hurricane Ridge Visitors Center I wore sneakers and socks and had a light jacket. At the visitors center in the early afternoon it was 37 degrees! Brrrr! My outfit wasn’t warm enough, so we didn’t spend that much time outside. We walked around a little bit and saw the mountains, then hopped back in the car!