We visited Kansas City and drove around the city one day to get a feel for it.  It’s a unique city in that the state line is pretty much right through the city.

It’s a fairly large city, with a baseball and a football stadium right next to each other at the east side of town right next to the freeway.  On our way out of the city a baseball game was about to start and we could see how full the stadium was getting.

We found a park to stop at right on the river and without realizing it we found a historic place.  Kaw Point Park is right at the confluence of the Kansas and Missouri Rivers and it’s where Lewis and Clark stayed for a few days to resupply and repair.  It sure wasn’t easy to find though, we had to drive through a parking lot for a big manufacturing plant, then make a sharp turn onto a levee and drive along a narrow dirt road on top of the levee to get to the park.  I don’t know why they ‘hid’ the park so well!

Here are some pictures we took at Kaw Point Park below.  You can click on the panorama picture in order to see it in more detail.  And, sorry about the shaded areas on the artist rendering, couldn’t adjust where the sun was! 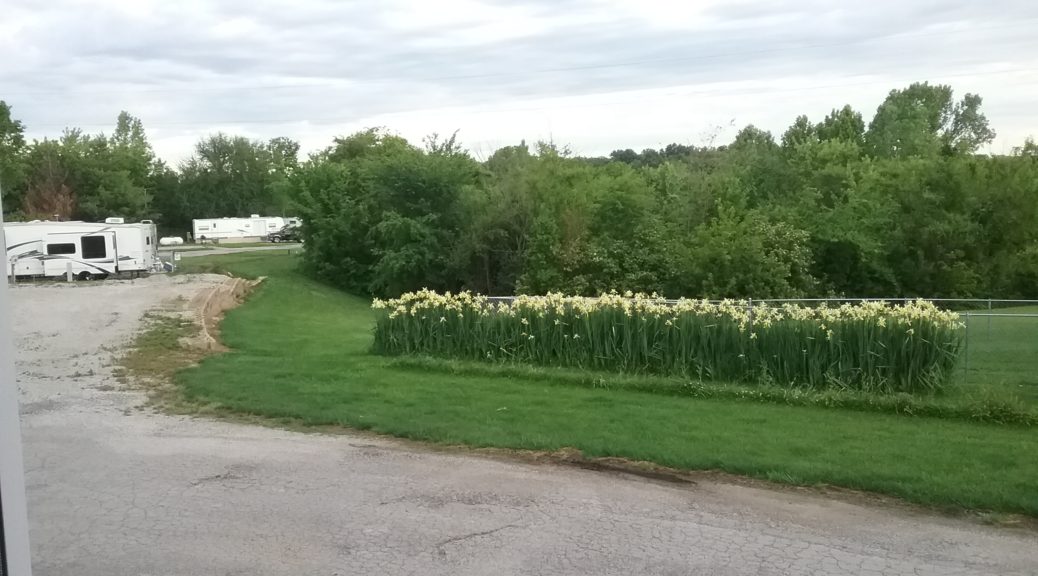 We’re staying a few days near Kansas City, MO and are at a lovely RV park in Odessa.  We are at a site without another site to our right, instead we have a lovely view down a hillside with a large garden of yellow irises and a lawn leading down to a pond. 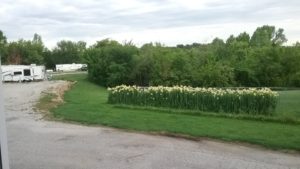 While we were staying in the Branson, MO area we had a couple of bad storms.  Two night in a row we had major thunderstorms and lots of rain, and on the second night we had a hail warning and a tornado watch.

But, about 10p.m. it was the rain and the flooding of the river our RV park was alongside that got us.  We got a call from the manager that the river was rising fast and we needed to evacuate.  We jumped up and got the rig secured, unplugged and hooked up to the truck in record time.

It was barely fast enough!  When I raised the leveling bars and picked up the little pads I put them on, I had to fish them out of the water.  We got out easily although we were both soaking wet.

We could see all our neighbors except one packing up.  The folks were were next door to us weren’t at home, and we don’t know if their RV flooded.  I hope not!

We went to a Lowe’s that was close by along with several of our neighbors.  In five years of full-time RVing this is the first time we’ve spent the night in a parking lot without water and electricity! We talked to several of our neighbors in the Lowe’s parking lot the next morning and found that one neighbor in 9G had flooding into his RV by the time he was able to get out and damage to his control panel.  We were in 7G and you can see from the picture below how far up the water would have risen for our site to be underwater.

The next morning we hooked up and headed to our next stop (that’s when we were planning to leave anyway) so we didn’t go back to the RV park.  I sure hope everyone got out ok! 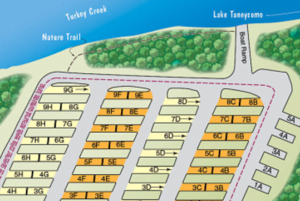 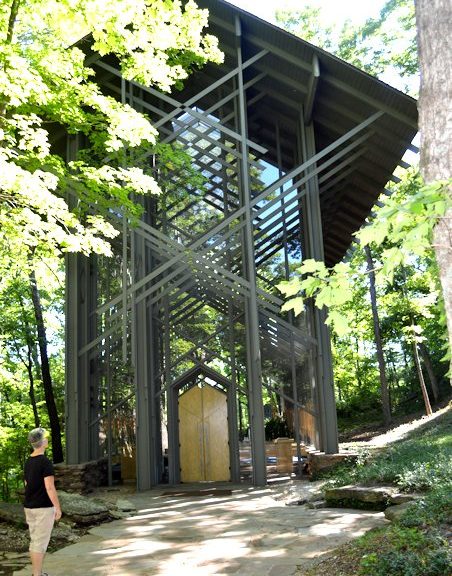 As an architect, Jeff knew about this chapel and wanted to visit it. It was built by E. Fay Jones who was a student of Frank Lloyd Wright and opened in 1980. It was built by a family on their land here in the Ozark Mountains.

It’s an amazing structure and I can see why it won so many awards.

Here’s a link to the website about this site so you can learn more: http://www.thorncrown.com/

And here are a few pictures we took: 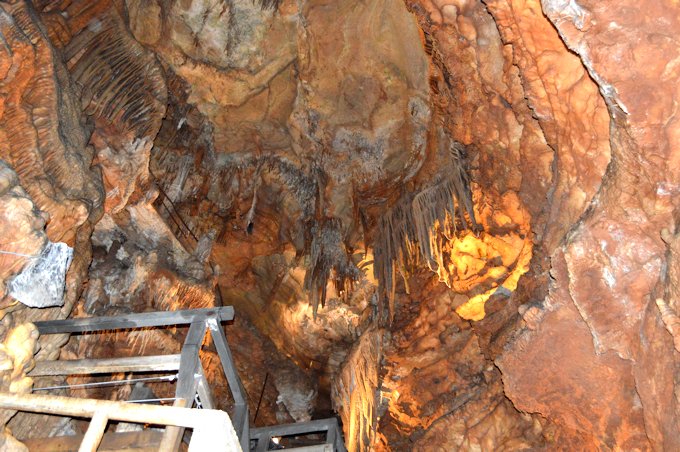 While in Branson we visited the Talking Rocks Cavern nearby. It’s not a big cave but has lots of pretty formations. It was named Talking Rocks because several decades ago when the first tours were started, speakers hidden in the cave would ‘talk’ as guests grew near, making it sound like the rocks were talking. The rocks don’t talk anymore, a guide gives you information.

This cave has lots of draperies and bacon formations. Bacon is what a drapery formation that has stripes of colors is called – it does look like bacon hanging from the ceiling!

This is a mostly vertical cave, and you climb down stairs to see the formations and cavern area, then climb back up the stairs. It’s not a lot of stairs thank goodness! 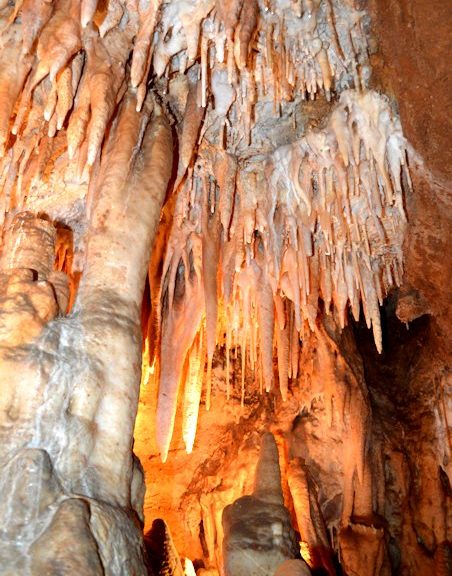 The area around Branson, MO has lots of caverns that are available for touring. We picked two of them and one was Cosmic Cavern, about an hour out of Branson. It’s actually in Berryville, AR.

This cave was discovered in 1845 and opened for tours in 1927. The tour doesn’t cover a large portion of the cave and there is a lot yet to be discovered. We visited one portion that wasn’t discovered until 1993.

This cavern has more soda straws than any other cave I’ve been in. It’s possible that it’s a more recent cave than some, since soda straws are the beginning formation of a stalactite. Also, quite a bit of the floor of the cave was in water, and the underground lakes are considered bottomless because the bottoms have not been found yet. Divers have gone under more than 70 feet but at that point the floor of the lake narrows to a crevice that the divers cannot get through.

This cavern is called “Cosmic Cavern” I think as a gimmick to be different from the other caverns in the area. When you enter the gift shop you are hailed with “Welcome, fellow Earthlings”.

It’s a worthwhile cave to visit with different rooms, the lake with blind salamanders (we didn’t see any) and the fact that it’s warmer than other caves at a constant 64 degrees. It does have a few narrow passages where you have to bend at the waist to get through, but they weren’t tight enough to trigger my claustrophobia, thank goodness!

Here’s a picture of the area we drove through: 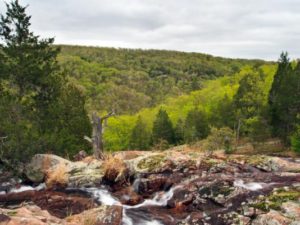 We left Vicksburg and flooding behind a few days ago and just got into Hollister MO.  The RV park we are staying at is alongside Turkey Creek which flooded last week.  All the folks staying here had to evacuate but they’re back now.  The floodwaters have receded from the park (but it’s still muddy in areas) but it’s still real high and some walking trails are underwater.

We stayed in Vicksburg MS for one night while travelling from Picayune to Arkansas. When we checked in we were told that due to flooding of the Mississippi River and a water main break that was under the flooded area there would be no water, for possibly 5 days!

We did have water for a couple of hours from a nearby water tower so we filled up all our bottles and pitchers and pots. It was enough to wash a few dishes and flush the toilet and drink, but not enough for showers the next morning.

I do feel bad for all the residents of Vicksburg though, and I hope they managed ok with the combination of floodwaters and no water in the taps.

Here’s an article about what was happening in Vicksburg: click here

We stayed at a state park in Murfreesboro, AR and it was really lovely!!  We were on a small loop right on the edge of a lake and we had the end unit (#45) with no close neighbors and a grassy area between us and the lake.

Here’s a panorama view from our front door (click on it to be able to enlarge it):