All around in Maine we see flowers growing on the sides of the roads – here are some photos: 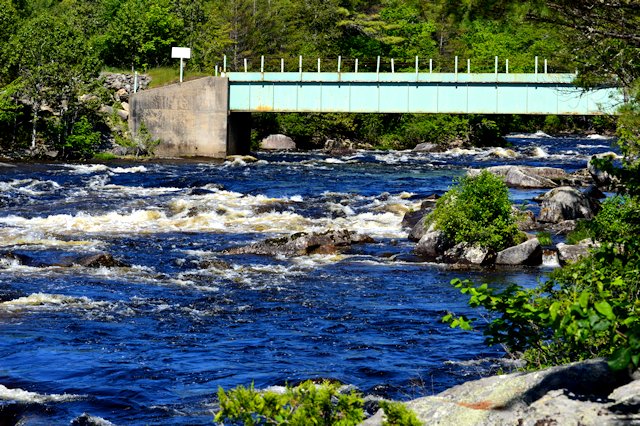 We didn’t really know what there was to see in north-central Maine, but the owner of the RV park where we’re staying told us about a great drive, on a private logging road (yield to the logging trucks!) that took us to where there was a great view of the Baxter Mountain (one of the highest in Maine, a dam, along a river where there was some class-5 rapids, and several beautiful ponds.  He said there was a chance we would see one or more moose, but we didn’t.

But, the drive was very pleasant, the rapids and dam were interesting and the scenery along the way and at the ponds was beautiful.  We saw several people on the road that had kayaks on their vehicles, but we saw no one running the rapids and didn’t want to hang around for several hours hoping to see some.  We crossed a small bridge that was so narrow one vehicle went at a time, and we had to wait for someone coming towards us (one of the photos is of that vehicle crossing the bridge).

Here are photos we took: 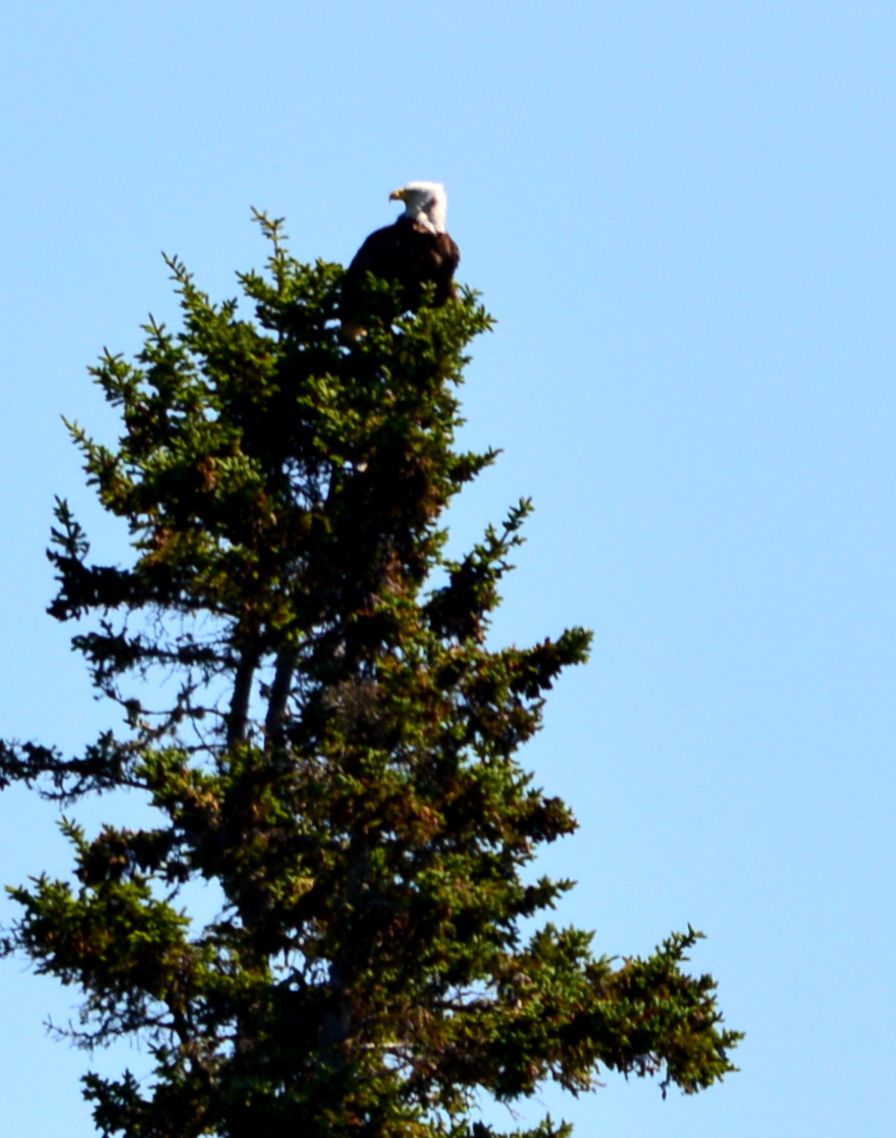 Southwest Harbor, ME is one island that is in a grouping of islands just off the coast of Maine.  Even though it’s an island, it’s only separated from the mainland by about a 6 foot channel, and during low tide you can walk across it without getting your knees wet.  The island is called Mt. Desert Island  although the island is not at all a desert, it’s lush and green and forested.  We asked several locals why it was called Mt. Desert Island and got several different answers, the Natl Park information indicated it was because when Champlain discovered it the tops of the two largest mountains were bald, thus looking like deserts.  The largest mountain in Cadillac Mountain which is about 1,500 feet high.  The others aren’t even 1,000 feet high, but along the coast that’s higher than anything else around.

We took a cruise around the islands and saw one village on an island where there are about 70 people, all are lobster fishermen.  They have some cars on the island, not registered or inspected or anything, and get to and from the larger Mt. Desert Island by the mail boat which goes back and forth several times a day.  No cars on the mail boat!  We saw an eagle in the very top of a pine tree, and an egret nest with an egret in it.  We also saw some sea lions on a rocky outcropping as well as beautiful scenery and some really expensive “summer camps” of the rich people that summer in this area.

We also took a drive through the Acadia National Park one day, which is wholly located on Mt. Desert Island.  It became a national park in the early 1900s when the rich folks who summered here saw more and more people move to the island and they realized they wanted it to stay less populated and more natural, so they formed a conservation group and bought up about 33,000 acres and after managing it themselves for a while, donated it to the National Park system.  Thus, Acadia National Park.  Our drive took us along the coast for quite a while, then inland and up to the top of Cadillac Mountain where there are some great views of the islands and ocean!

Here are some photos we took during the cruise around the islands and through the National Park:

The weather lately has been real variable – one day it’ll be gorgeous blue skies and in the high 70s, the next day it’ll rain and be rather cold.  These two (above) haiku verses came to me during one dramatic weather change.

The campground we stayed at in the Lexington-Concord area was beautiful!  Here’s my review of it on Yelp: http://www.yelp.com/biz/boston-minuteman-campground-littleton?hrid=d26FXxW5KstcSSEtD67UZQ 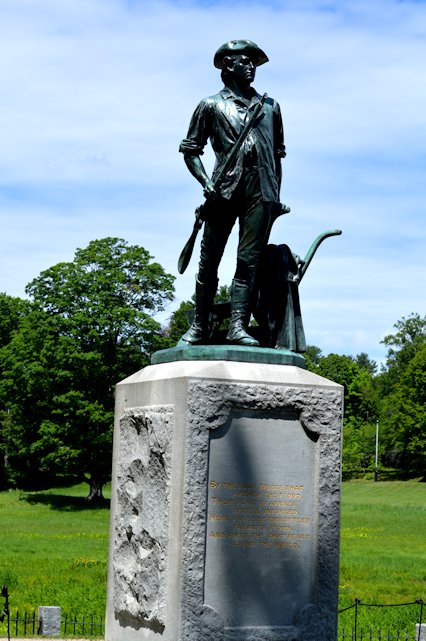 While in Mass. we stayed near the Boston suburbs of Lexington and Concord as those are the two sites where the start of the Revolutionary War happened.  I know very little about it – mostly the “Ride of Paul Revere” with the “1 if by land, 2 if by sea” signal, and the “Shot Heard Round the World”.

The militia was made up of every able-bodied man from 16 to 60 years old who were to carry arms and ammunition and supplies with them everywhere they went, in order to be prepared at a moments notice in case of Indian attack or other military needs.  They trained once every few months, although pretty much every man knew how to use a firearm at that time.  The Minutemen were the elite of the militia, they knew more military codes and trained much more frequently.

Many colonists were fed up with British rule and were rebeling quietly.  They had stolen some rifles, ammunition and a cannon from the British outpost in Boston and had hidden them in a house in Lexington.  When the British heard about these thefts, they decided to march to Lexington and disarm the population there.

The colonists heard about this plan to disarm the population and decided it was time to act.  There were two possible routes from the British outpost in Boston to Lexington, one was across the narrow land-bridge connecting the island of Boston to the mainland via a south route, and one was to cross the Charles River by boat via a north route.  Hence, the ‘1 if by land (the south land route) or 2 if by sea (the north route across the river).  A man was designated to put lanterns (1 or 2) in the tower of a church and then previously designated riders, one of whom was Paul Revere, would ride out and warn the colonists between Boston and Lexington that the British were coming and which way they would be coming.

Paul Revere was captured during his ride, but several other riders got through, and as people were warned they sent more riders out.  There were about 700 British that marched to Lexington and when they reached the “North Bridge” that would take them into Lexington, they were met with armed resistance by the militia and Minutemen.  For a time they just stared and shouted across the short bridge, and then someone (it was never determined what side) fired the first shot.  Then, it was a battle and both sides took casualties.

The resistance was so fierce that the British decided to retreat back to Boston.  But, as the countryside was warned and militia came pouring in from everywhere, the British retreat was harassed the whole way by almost 20,000 men who sniped at them from the trees as they marched.  They took heavy losses, and the war had begun!

Here are pictures of the North Bridge and a map of the two possible routes “1 if by land and 2 if by sea”: 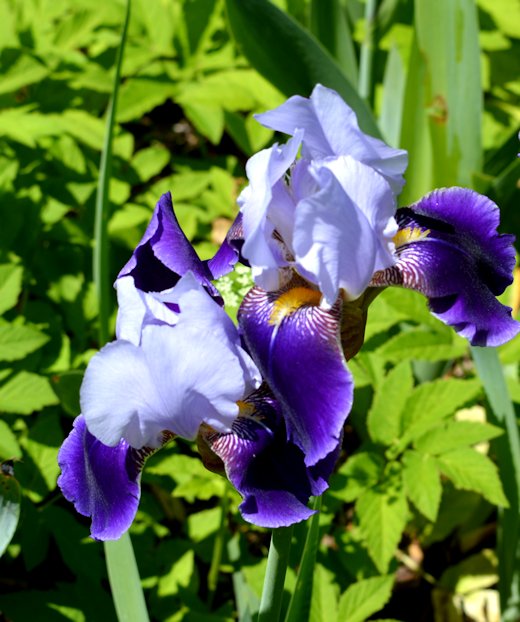 When we visited the site of the “North Bridge” where the “Shot Heard Round the World” happened (the start of the Revolutionary War) I was pleasantly surprised to find a beatiful garden on the grounds of the Park Service building.

It’s nice to finally be in spring time and it’s beautiful all over in the northeast part of the country.  I’ve noticed that there’s more use of color in people’s front yards than I ever saw in So. California.  There are colorful flowering bushes and plants everywhere!

Here are some pictures of the garden at the park: 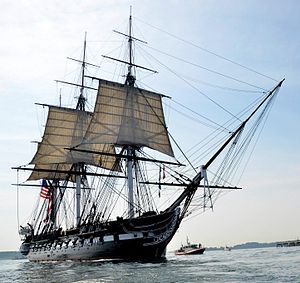 When we arrived in Littleton, Mass., which is near Concord, Mass. (Site of” Shot heard around a world”), we decided to visit the U.S.S. Constitution(“Old Ironsides”). It is the world’s oldest ship still on the water and on active duty. The day was sunny and warm.

It is located across the river from downtown Boston.  It is still considered to be a regular navy ship and is manned by active duty crew.

One of my hobbies is drawing old sailing ships. I have photographed this and other sailing ships as a guide for my hobby.

During her famous battle with the British Frigate Guerriere in the War of 1812, Old Ironsides got her nickname. “Using his heavier broadsides and his ship’s sailing ability, Hull had managed to surprise the British. Adding to their astonishment, many of their shot rebounded harmlessly off Constitution‘s hull. An American sailor reportedly exclaimed “Huzzah! her sides are made of iron!” and Constitution acquired the nickname “Old Ironsides”. The sides are 24” of solid oak. The British shot just bounced off.

Below are the vital statistic for “Old Ironsides”:

Some trivia: Do you know why Marines are called “Jarheads”? During the early part of the 1800’s, Marines were aboard Navy vessels. They were part of the boarding parties when engaging enemy ships. They were also snipers, positioned in the foretops and rigging. Most Navy sailors were short, but the Marines were typically 6 feet tall. In the photos of the berthing deck, you can see that there wasn’t much headroom. Many a Marine, at 6 feet tall, would “Jar” their heads on the beams, ergo “Jarhead”.

Here are photos that we took on “Old Ironsides”:

We wanted to get real Maine lobster while on the coast of Maine, and there was a seafood restaurant within walking distance of our RV park.  It wasn’t on the water in one of the little coastal towns but it wasn’t as expensive either!

And, the food was great!  Here’s the link to my review of the restaurant on Yelp: http://www.yelp.com/biz/demuros-top-of-the-hill-restaurant-southwest-harbor?hrid=zK_zc8zD1pHywU0enI5n3g.

And, here’s a picture of Jeff enjoying his lobster: 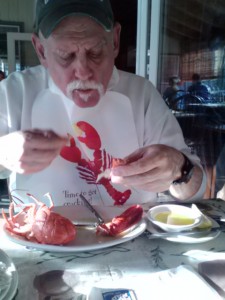 While visiting Cape Cod we went to the beach one day and found that a couple of guys were surfing!  The surf was normally pretty low but that day it was quite good.

Laddy enjoyed being at the beach although we weren’t able to let him go off-leash.