While in the Milwaukee area we visited the Milwaukee Art Museum. While art museums aren’t usually on our list of things to do in any area, this one was because of a unique
is an interesting shape to the exterior of the building. The outside roof is movable! It has two sections that can be closed or opened, and when they are open they look like a bird spreading it’s wings! Overnight the roof is closed, but at opening time the two sides start to part and move upward, and in about 3 minutes the two sides are spread wide and look like a pair of wings.

The section of the museum that includes the roof was designed and built in 2001 and is called the “Quadracci Pavilion”. The building part of this section reseumbles the prow of a large ship with the roof as sails. It houses some exhibits and a large open space that can be rented for events and weddings.

At noon the roof closes and then reopens, and at closing time they close. It’s mostly for the design, although it does let a lot of light in since the “under-roof” is glass with steel ribs. If the wind hits 24 mpg the wings will automatically close.

The museum itself houses many art exhibits on 4 floors. We enjoyed walking around the museum and found a few pieces that we thought were interesting. 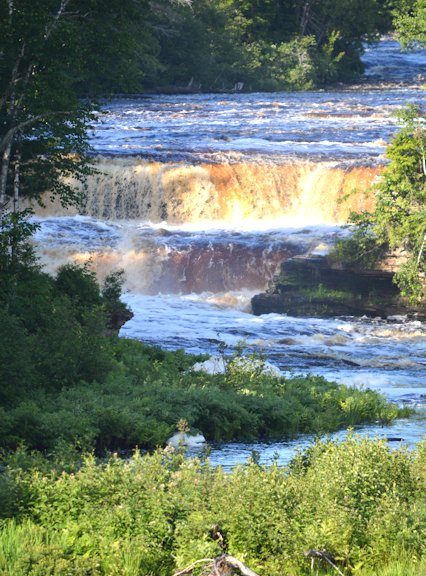 While in the upper peninsula (locals call it the UP) of Michigan, we visited Tahquemenon Falls on the Tahquemenon River. It’s a beautiful area and the falls, while not tall, are very splendid. The water is a unique copper color due to the large amount of tannic acid in the area which leeches into the river and shows wonderfully in the falls. There are two areas with falls, one is larger and has dug a gorge just below the falls, and the other area is around a bend of the river with an island at the center and several short falls around both sides of the island.

The viewpoints are a short distance from the road and an easy walk. At the gorge you can go down 116 steps to view the waterfall and gorge, but then you have to come back up those 116 steps. We decided to bypass that.

Then, we travelled to a northern point of the UP called WhiteFish Point, where Lake Superior narrows to a point at the eastern end. This area is called the Shipwreck Coast because of the fog, storms, and how close the ships must pass to each other in the narrow area. There have been many shipwrecks in this area, the first in the early 1800s and the latest one in 1975 when the Edmund Fitzgerald went down quickly and all 29 crew were lost in a storm.

The Shipwreck Museum has information and artifacts from several wrecks that have been visited by divers to bring up artifacts. The Edmund Fitzgerald was visited in 1995 and the ship’s bell was brought up. A replacement bell inscribed with the names of the 29 crewmembers was taken down to replace it at the wreck to serve as a permanent memorial. All 29 are still entombed there.

Here are pictures we took of the falls, the museum and whiteFish Point: 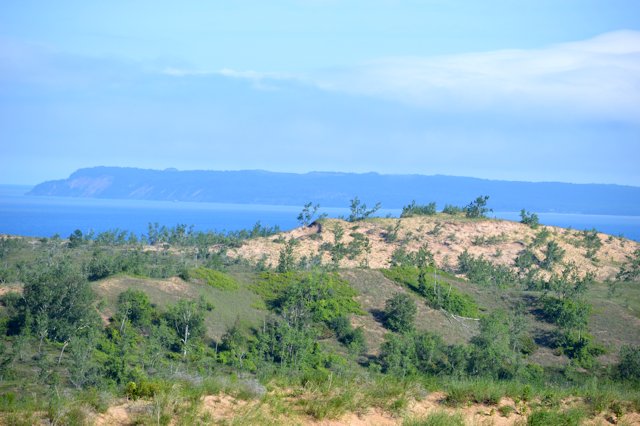 While in the northwest part of the lower peninsula of Michigan, we visited a popular national park called Sleeping Bear Sand Dunes. It’s rather unique because the sand dunes are right up against the shore of Lake Michigan and are very steep.

The national park is really a national lakeshore. There are a few areas of the dunes that you can visit, and a few hiking trails through the dunes. The vegetation on the dunes is very fragile so they don’t want people walking around except where it’s allowed.

One area where you can see how steep the dune is right down to the shoreline was very pretty. The water is shallow for a ways out and the sand makes it very green. Then, as it gets deeper the water turns to blue. There are signs saying you should not climb on the dunes because they are so steep and if you fall you go right into the water and then have to be rescued. Also, some people get down and cannot get up because of the loose sand. But, even so we saw several people climbing around on this very steep sand dune.

Along the shore there are several small inlets, but all of them are being closed off to the lake because of the sand building up a dam. We could see one from an overlook and took a picture.

There is an area where there is a dune that is set aside for people to climb on. It’s a popular place for kids and families, and has a playground, water fountains etc. We did not climb the dunes, we left that for the younger people. Plus we had Laddy and dogs are not allowed in the climbing area.

The area is called Sleeping Bear because of an old native american legend. While none of our pictures showed it (it was getting hazy) there are two small islands off the shoreline from this area. Legend has it that a storm on the western coast of Lake Michigan drove a bear and her two cubs into the lake to try and escape it. They swam and swam and the two cubs got very tired and couldn’t go any further and they because the two small islands. The bear made it to the eastern shore of Lake Michigan and sleeps on the shore where she can see her two lost cubs.

Nearby there’s a real pretty lake that has a sand bar that almost separates it into two lakes. There’s a causeway built across the sand bar and it’s not very long at all. This lake, Lake Glen, has homes built pretty much all along the shoreline and they all seem to have piers and docks and boats. We’ve noticed during our time in Michigan that water sports are really popular here, and for good reason since there’s so much shoreline!

Here are some pictures we took of Sleeping Bear Sand Dunes and Lake Glen: 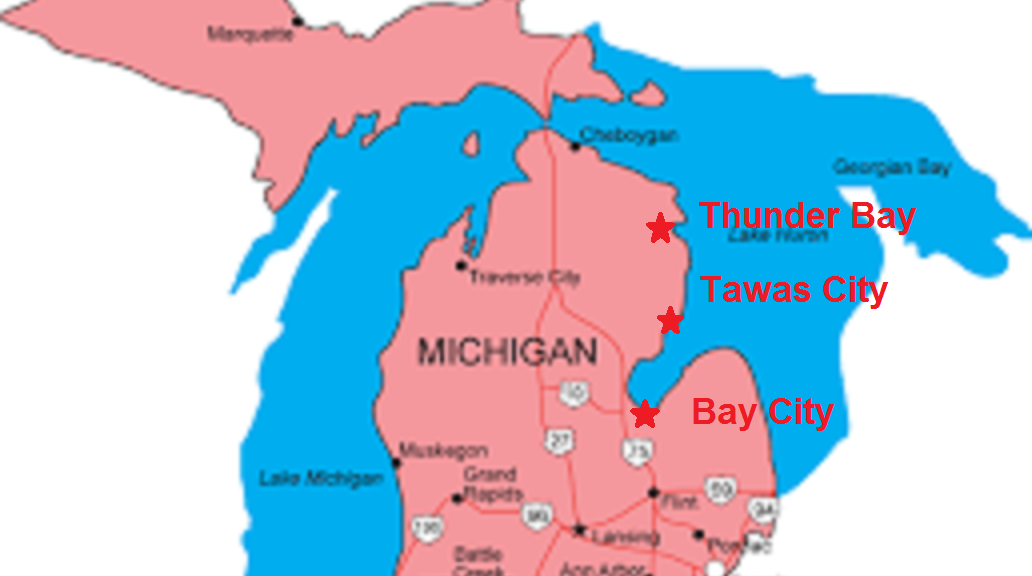 The lower peninsula of Michigan is shaped like a mitten. It’s actually called a mitten, and Tawas City, where we stayed for several days is at the upper part of the hand section of the mitten near the thumb area.

Bay City is at the bottom of where the thumb joins the hand on the mitten. We drove down there one day to see the coastline and scenery. Bay City is pretty, right along the Saginaw River where it empties into Saginaw Bay. Much of the riverfront is parkland with walking trails, grassy areas etc. It’s really beautiful.

I’ve attached a map of Michigan showing where we stayed on the east Coast (Tawas City), where we took the shipwreck tour (Thunder Bay), and where we drove one day (Bay City). 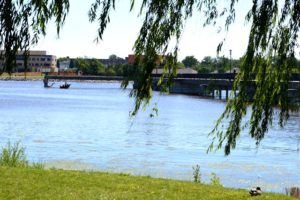 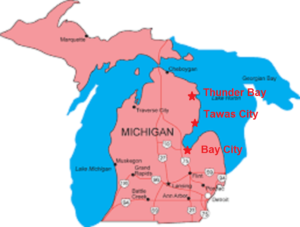 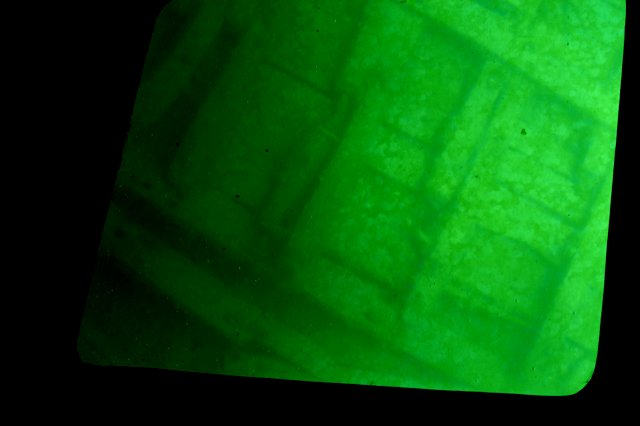 While on the east coast of Michigan which is on Lake Huron, we took a boat tour to view some shipwrecks in Thunder Bay. The Great Lakes have many, many shipwrecks over the years due to heavy shipping through the 1800s and early 1900s together with the bad weather and storms in the area. Over a dozen are in the Thunder Bay area and some of these are in shallow water and visible from a glass bottom boat.

We saw two shipwrecks on our tour, the first was the New Orleans which was a side wheel steamboat used to bring passengers and freight from the New York area to the Michigan area. All the passengers and crew were rescued from this shipwreck. It sits in just 7.5 feet of water so it was quite visible from the boat.

The other ship was the Monohansett which was a cargo ship. It sunk in 1907 in under 10 feet of water.

Also on the tour we saw forested coastline and a couple of beautiful islands, one with a lighthouse and house for the keeper and his family.

The tour boat docks on the river and we passed under a drawbridge to get into Thunder Bay. We had a good time on the boat; here are some pictures: