While in Sebastian we learned that the Navy Seal museum was located nearby so we visited it one day.  It’s also the training center where G.I. Jane was filmed, but of course we didn’t get to see that part of the base.

The museum was interesting, with lots of displays and items from the history of the Seals.  A recent display was the actual escape pod used by Captain Phillips when his ship was boarded by pirates and he was forced to go into the escape pod with the pirates and was rescued by Navy Seals.  Tom Hanks played Captain Phillips in the recent movie, which we saw and really liked (it’s pretty bloody though, especially the end where the Seals rescue him!)

We also saw another movie just a few days ago about Navy Seals – “The Lone Survivor” with Mark Wahlberg.  Also a really good movie!

Here are some pictures we took at the museum: 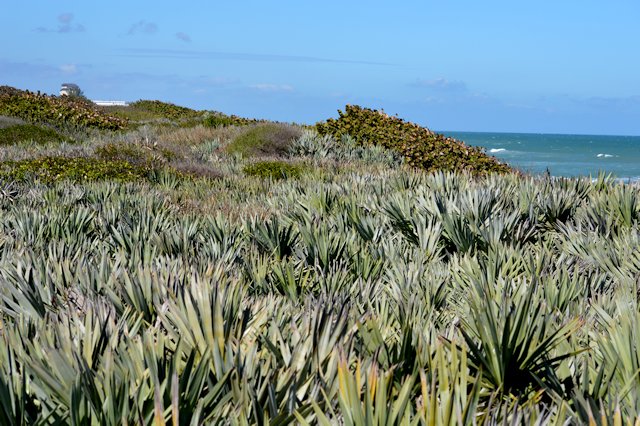 We stayed for a week in Sebastian FL, real close to the Atlantic coast.  It was fairly warm every day – in the 70s and low 80s – and comfortable at night in the 60s which was GREAT for early February 2014 when the rest of the country seemed to be buried in snow.

We visited the coast while there.  One thing I find interesting about the Atlantic coastline of Florida is that much of it has ‘dunes’ separating the beach from the roads and homes etc.  These dunes aren’t like what I’m used to in the desert where it’s just a hill of sand.  These dunes are covered in bushes and palmettos.  They’re also very fragile so there are signs everywhere to not walk on the dunes, and there are wooden walkways going over the dunes to the beach where there’s beach access.

While in Jacksonville we decided to try and find some persian food as we hadn’t had any for quite a while. We found a small restaurant near downtown Jacksonville called Green Erth Bistro, which has persian food and several vegan dishes as well.  We liked it a lot!!  Here’s my Yelp review of it: http://www.yelp.com/biz/green-erth-bistro-jacksonville?hrid=Ph7bSpRxylQKLXSPjmhBTA.