As we drove through Tucson on the 20th on our way to visit family in Casa Grande AZ, we ran into a snowstorm!  Very unexpected!  Tucson is in the southern part of Arizona and is usually very hot and dry.  Lots of cactus etc.

Here are a few pictures:

We stopped in San Antonio on our way west and visited the Alamo.  It’s quite small in terms of size, but has a great story to tell of bravery, patriotism and sacrifice.   Did you know that the siege of the Alamo by General Santa Anna was 13 days long and the Mexican Army had over a thousands troops while the U.S. had less than 300?  Did you know that the U.S. troops were given a choice to stay and fight to the death or leave and try to escape and that only one person left?  Did you know that no reinforcements were able to make it to the Alamo in time to come to the aid of the soldiers – every soldier was killed and their bodies burned.

There were some women, children and slaves who were spared with the command to tell the story.

If you’re ever in south-central Texas, be sure to stop and see the Alamo!! 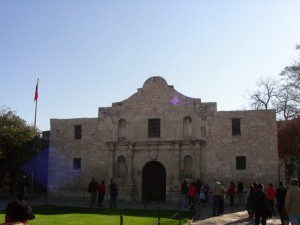 We spent a little over a month in Picayune with my daughter and her family, and had a great time.  It was really nice to spend more than a few crowded days with them.  We got to know each of the kids a lot better and they got to know us more.

But, now it’s time to head out.  We’re heading west to California…I’ll post more as we travel!