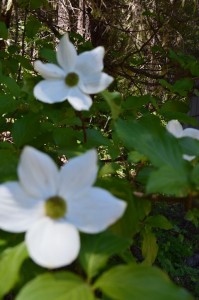 As we drive through forests and meadows here in northern CA and southern OR in spring, one type of tree we see often is a dogwood.  In some places they line the roads and are all in bloom.

They are really pretty trees and the white flowers contrast so nicely with the shades of green of the other trees.

We see these trees at altitudes of between 3000 and 4500 feet up, and they only bloom if they are in the sunlight.

We also took close-up shots of another little wildflower and a manzanita in bloom:

We visited a nearby mountain twice while we were in Shady Cove, OR called Mt. McLoughlin.  The first visit was on a very cloudy day that ended up raining on us so the pictures didn’t come out very good.  So, we took another trip to it on a beautiful, clear day and got some great shots!

On our first trip we went up a dirt road as high up onto the mountain as vehicles are allowed.  From there you have to hike…which we didn’t do 🙂   There was still a lot of snow on the ground and it was cold!

Our second trip we drove around to the east and south of the mountain where there are very pretty lakes.  Beautiful area and definitely worth the second trip! 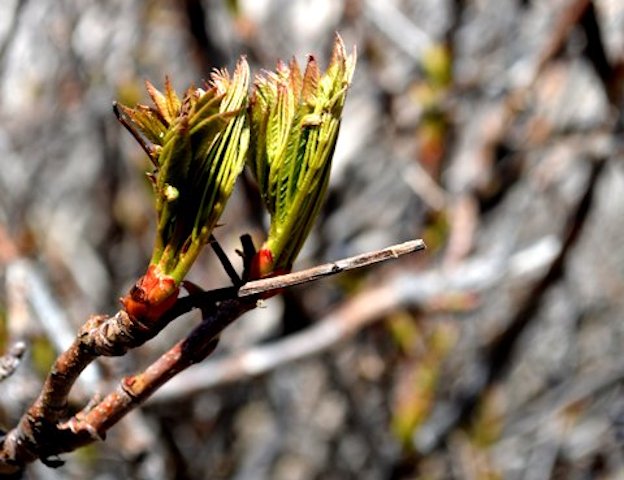 We took a trip to see Crater Lake one day while here in Southern Oregon.  It’s beautiful!  The water is a deep blue, and as it’s pure rainfall (no rivers flow into or out of the caldera) it’s the cleanest, purest water on earth.

The blue of the water was enhanced by the snow all around us!  Here are some pictures:

We drove up to Crater Lake one day while here in Southern Oregon.  Luckily we checked the weather before leaving, because it was in the high 70s at the RV park, but barely 34 up at Crater Lake where there’s still 10′ of snow piled up along the road and blocking the entire first floor of buildings in the area!

Crater Lake was formed by a volcanic eruption approx. 7,700 years ago.  Native American sandals were found in nearby caves buried in the ash, so there were people living in the area when the volcano erupted.

Here are some pictures of the area we saw around Crater Lake:

Near where we’re staying there’s an area where the Rogue River had carved deep into the volcanic lava tubes that formed along the slopes of Mount Mazana (now Crater Lake).  The gorge was formed when the river caused lava tubes to collapse through this one area.  Here are some pictures:

Last week Laddy had to have emergency surgery to remove a foreign object that he had swallowed.  He’s swallowed things before but they’ve always passed, this one didn’t.  We didn’t even know he’d swallowed something!  It was in his intestines for probably 3-4 weeks.

Since coming home from the hospital he’s had some trouble getting up and down the steps into the truck and into the trailer.  So, Jeff made a ramp for him and after his initial fear of it he’s using it very nicely.  Here are a coupl

We went out to eat on Sunday after getting into the area, and chose Pizza at the Cove over several other pizza places in town (weird how many there were!)

We were very pleased with it.  Great taste, great service.  Yum!

Here’s our review on Yelp.

We traveled on Sunday into Oregon and are now at a campground in Trail, Or.  It’s a very small town right along the Rogue River, about 25 miles north of Medford and 5 miles north of Shady Cove.

We’re planning to visit Crater Lake and also see the area, but our plans have been disrupted a bit as Laddy has been sick.  It seems like he’s got the flu that Jeff and I had several weeks ago, he’s vomiting and can’t keep any food down and doesn’t have any energy.  After a day of not keeping even water down we called a local vet and they were able to see him the same afternoon, but they don’t know what’s going on.  The doctor gave him an anti-vomiting shot and we’re now watching him closely and giving him sips of water that he’s now able to keep down.  He has no interest in any food, and it’s been 2 days since he’s had any food.  But, he has a little more life in his eyes and is able to rest a bit more than yesterday when he mostly paced around in obvious discomfort.  If he can’t eat anything in the morning we’ll have to take him back to the vet and see if he can figure out what the heck is going on.

So…for now we’re just hanging around the trailer.  Hopefully in a day or two Laddy will be back to his usual energetic and happy self and we can get back to sight-seeing!

An update to this post on Thursday afternoon – Wednesday we took him back to the vet as he wasn’t showing any interest in any food, although he was keeping small amounts of water down.  They made him swallow barium and then took a series of X-rays as the barium flowed through his digestive system.  It showed a foreign object blocking his intestines quite a ways in.  He had to have emergency surgery but is recovering nicely and should be able to come home tomorrow or Sunday.  It’s apparently a cloth toy he ate a few weeks ago while we were at the Park of the Sierra.  We knew he’d eaten one and it passed within a day or so, so he must have eaten TWO things!  Argh!

As we were driving north we found a beautiful view of Mount Shasta with pastures and farmland in the foreground.  Jeff took several pictures and I stitched them together to make a panorama shot.  Here it is – if you click on it you’ll see a larger view.