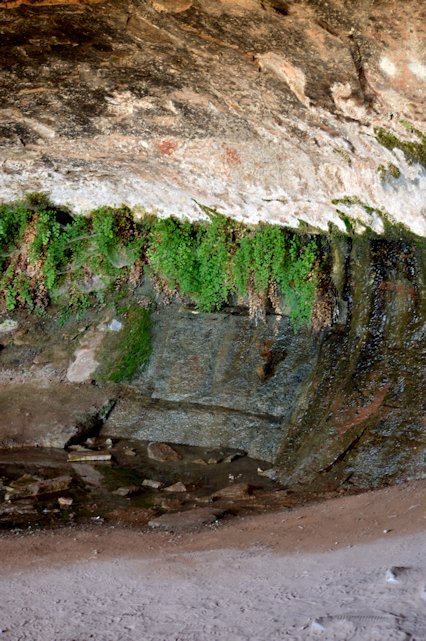 While in the “Needles” area we hiked to a couple of interesting places. One is called the Upheaval Dome, which is a huge round depression in the rocky hillside with a large white rock dome in the center. Scientists aren’t totally sure how this round depression formed, but the most accepted theory is a meteor strike. The large white dome in the center is apparently salt. It certainly looks like a meteor depression when we got to the rim and looked down into it.

Another hike we took walked around some large rock formations where the base has washed away from floodwaters, so the rocks have a mushroom effect. We walked under the sides of many of these rocks…it was a little scary to think that the rocks could fall on you…but apparently there hasn’t been a rockfall in a very long time.

Under one of these mushroom rocks is a spring that comes out through the rock. It flows all year long, so there’s a long history of people living in this area. We say some rock walls that were painted by people approx. 1,000 years ago, and also a cowboy camp under a nearby mushroom rock where cowboys had brought in a stove, cupboards, a rail to tie their horses, and a few other items to make the area as comfortable as possible. It sure beat sleeping out in the open with no water!

When we left the Canyonlands park we drove to a nearby state park called the Dead Horse Point State Park. We learned that it’s called Dead Horse because the shape of this mesa, up above the deep river canyons, has a ‘neck’ that’s only 30 years wide leading to a larger mesa end. Cowboys would herd wild horses through this neck onto the mesa end and then block the neck with dead trees making a pen to hold the horses till they could catch them. One time, however, the horses got left there and they all died of thirst, while able to look down the steep canyon walls to the river 2,000 feet below! Awful! The second reason this park is called Dead Horse is that if you stand at the end of the mesa looking down to the river and canyons far below, there’s a whitish rock formation that looks like a horse!

Here are pictures we took of the Cave Springs, the Upheaval Dome and the Dead Horse Point State Park: 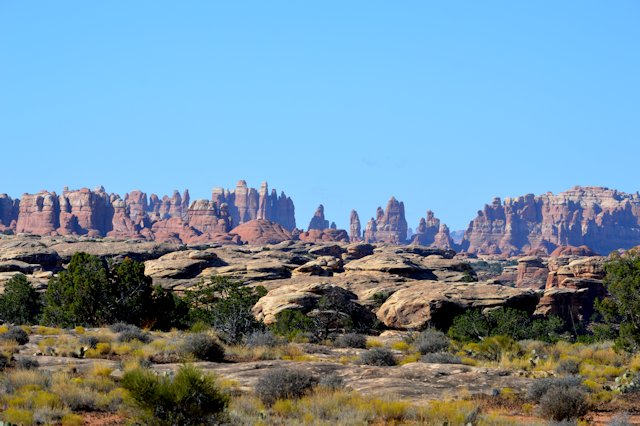 The Canyonlands National Park has three areas that you can drive to in order to see the canyons, rivers and formations of rocks, some small and some large. One area is the Island in the Sky, described in my earlier entry. Another area is called “The Needles” based on a length of cliff that has been eroded into many narrow pointed formations that look like needles. We visited this area one day and to get to it you drive through many very steep narrow canyons to get the large mesa that has river views.

Here are pictures we took of the mesas, buttes and rock formations that are visible from “The Needles”: 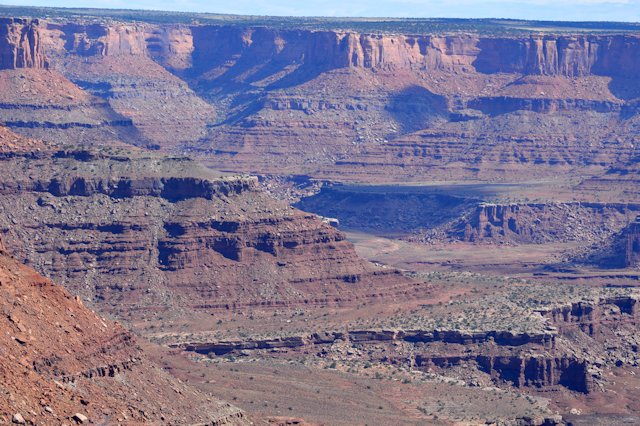 We visited the Canyonlands National Park which is near Moab. I didn’t really know a lot about this national park before we came. It’s a large area consisting of vast canyons with the Green River and the Colorado River at the bottom with a large high mesa between the two rivers. This large mesa is called “Island in the Sky” and it really did seem like it…it’s so much higher than the surrounding canyon landscapes that you are looking down on birds soaring through the sky.

The Green and Colorado Rivers are both large rivers, and they join together near the south end of the park. Most of the canyon areas as accessible only by 4×4 vehicles and long strenuous hikes, so we stayed up on the mesas to get views of the canyons.

Those views were fantastic! I think they rival the Grand Canyon in beauty and diversity. Looking west from the Island in the Sky you can see down to a lower mesa and to the numerous canyons carved through it. The Green River meanders through the area with lots of hairpin turns and the number of carved canyons is just amazing!

Here are pictures we took of the canyon and river views: 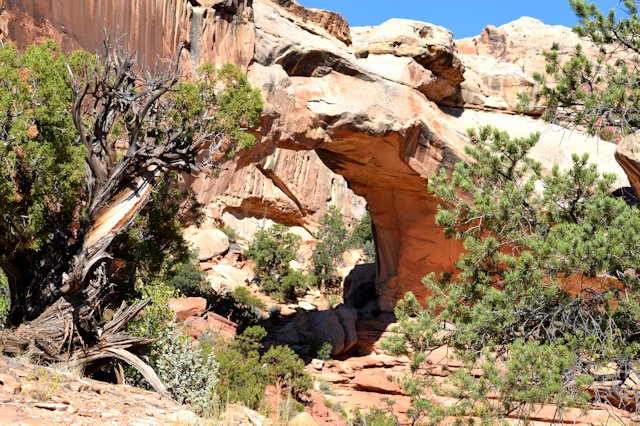 We hiked to see a natural bridge while in Capital Reef, the Hickman Bridge. It was 1-mile to the bridge (and then 1 mile back!) and mostly uphill to get to the bridge formation. We got winded but had a great time on this hike. We saw lots of rock formations in weird shapes, and learned about an ancient volcano many miles to the west whose lava flow was carried into the area by flooding, so the hillsides are strewn with black rocks that don’t belong with the red and white rocks of the area.

The bridge was fantastic! It’s very high and wide and the trail goes under the bridge itself so you can see it from several angles. I suppose people could hike up the hills and walk across the top, but there are signs saying to stay on the trail! We did see people who had hiked to nearby hilltops on another trail – but that was several miles long and we aren’t as young as we used to be!

Here are some pictures we took on this hike: 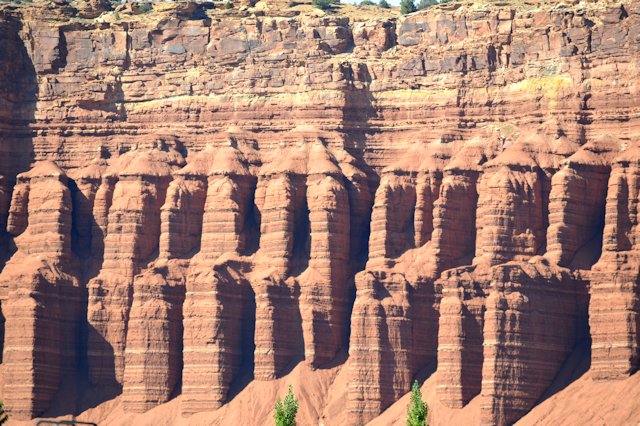 While staying in Torrey, UT, we took a drive to drive through the contryside nearby. We took a road north of a nearby town called Loa where my brother and his family used to live. It’s very pretty country, lots of fields and horses and cattle. It’s very green due to the irrigation – where it’s not irrigated the land is very dry this time of year (Sept). Our drive took us way up into the nearby hills where we saw hillsides of aspen trees turning gold and red, and a couple of small lakes.

And, the RV Park where we stayed had a great view of red cliffs that had eroded into weird shapes. Here are pictures of our drive and of the view from our RV windows: 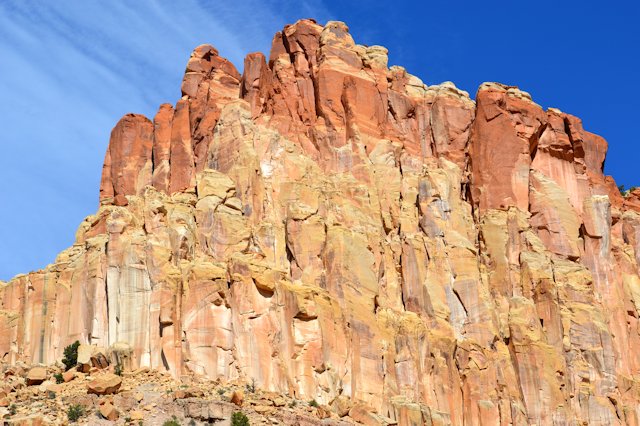 On our first trip into Capital Reef we drove along the main road and also down the “Scenic Drive” which is paved for several miles, then turns into a dirt road that goes deep into the canyons. We saw lots of great rock formations along this drive, including some named formations and some native american petroglyphs. On the dirt road, we drove between sheer high cliffs that felt like we were in a large city with skyscrapers! It was an eerie feeling, and we were glad it wasn’t threatening to rain because we were driving down a wash and a flash flood would have wiped us out!

The park is called Capital Reef for two separate reasons. The Reef part is because these steep sheer cliffs that run for over 100 miles were an impassable barrier to pioneers who came through this area. They called any such impassable barrier a reef, and this was the worst they had seen. The Capital part is because of a huge dome formed from an ancient sand dune that looks like the Capital Building dome. Hence, the early settlers named it the Capital Dome.

There’s lots more of the Capital Reef park that can be seen on hikes and other drives. We went on a hike to a natural bridge,a nd on a drive through the Reef on a much longer dirt road. I talk about what we saw on those trips in other entries.

Here are pictures we took during our first trip into Capital Reef: 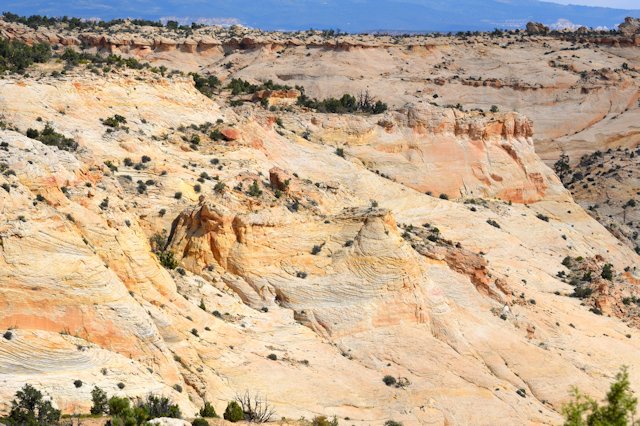 We came to Torrey, UT to see two national parks nearby, Capital Reef and Grand Staircase/Escalante. The Grand Staircase/Escalante park is named for the bands of color on one very long cliff within the park. The bands make it look like a staircase. The Escalante part of the park is an ancient sand dune area that was compressed into rock millions of years ago, and as the river cut through it and the dirt eroded from the wind, strange and interesting shapes appeared.

We drove through the Escalante region and found the geology fascinating. The ancient sand dunes eroded into swirls, bands, domes and other weird shapes. It was very pretty.

Here are pictures we took of our drive through Escalante: 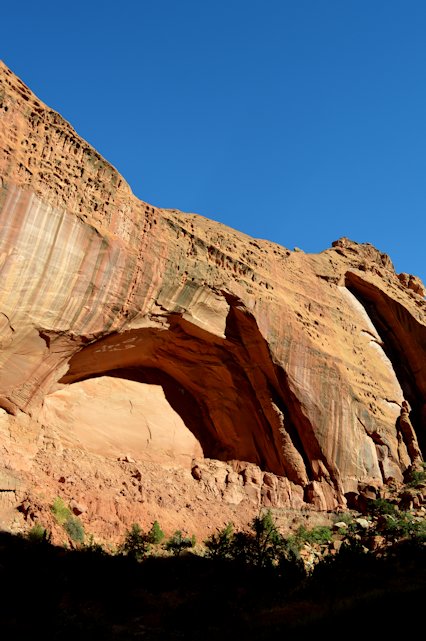 Our last trip into the Capital Reef national park was to drive through a more remote section of the park. Several miles were dirt road, and while in good repair, the washboard effect was very pronounced…the noise and shaking really scared Laddy and he kept trying to get into Jeff’s lap!

But the views were great – very interesting rock formations and canyons.

Here are some pictures we took during our ‘back-country’ drive:

We visited Delta, in western Utah, so we could dig for fossils in a privately owned quarry.  The fossils were NOT dinosaurs, though, they were trilobites, or small creatures who lived approx. 550 million years ago in the sea that was in what is now western Utah.

At this quarry they give you a bucket and a couple of small pickaxes and you can dig through the shale rock to find trilobites.  There are LOTS of these small fossils to be found!  We filled our bucket and we got to keep all that we found!

Here are pictures of some that we found: 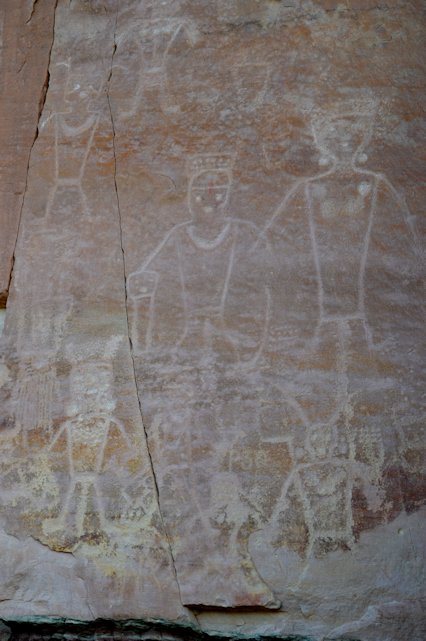 We visited the Dinosaur National Park a few days ago, but one area that contains petroglyphs was closed due to a fire that occurred the night before we visited. So, we returned yesterday to view the petroglyphs. It was very interesting to see them. The petroglyphs have been dated to approx. 1,000 years ago and are from the Fremont people that lived in the area at that time. Most could be seen from the road or by hiking a very short distance which was convenient.

We also visited another petroglyph area near Vernal that is on private land owned by the McConkie family. We got a brochure about it that stated this was ‘a concentration of some of the best and most easily accessible Native American art to be found anywhere’.

Well, as to being easily access accessible – I find that statement debatable. We climbed up a hillside about 200 feet, then wound our way along the hillside at the base of some very interesting cliffs for about a mile, scrambling over and around rocks on several occasions and up and down some bare dirt embankments that were quite slippery. But, the artwork was worth the hike! Because it’s on private land there was some graffiti in places, and I’m unsure about some of the art that was scratched into the cliffs…it looked too modern! But, all in all a very interesting hike. Here are some pictures we took from both areas: