We were out and about on Saturday and I had some red ants climb up onto my left foot and leg and got some bites.  Some on my foot where any kind of shoe rubs against them, and some up my leg.  We counted 17 bites!  And BOY DO THEY HURT!  I don’t think I’ve ever experienced the kind of burning/stinging sensation that they have caused.  It’s really painful.  I’ve been slathering on the calamine lotion which helps until something rubs against the bites, like a shoe or pant leg.  Then it starts up again.

Here’s a picture of a few of them on my leg: 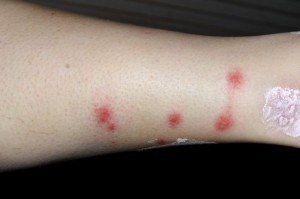 Several people staying at the RV park we’re at have suggested we eat at the River Ratz Cafe just a few miles away.  We decided to try it and we loved it!  Here’s our review of the cafe on Yelp: http://www.yelp.com/review_share/FPj49mhqYJyMRYTrm910lg/review/PI3oJeB6rDrkQeApGVW-Qg?fsid=VwM56MRiGN6IZTOHizjH-g

We’re back in Florida for our second winter on the road, and we again stayed for a while near the Kennedy Space Center.  Our main purpose in staying here was to witness the launch of a rocket carrying a satellite into space, but alas, the launch was postponed at the last minute and we didn’t get to see it.  We may head back when the launch gets rescheduled if possible.

While there we visited the Kennedy Space Center again.  Last December we bought annual passes (which were just a bit more expensive than one-day passes!!) so we had an opportunity to visit again without paying any additional fees.  Last year while we were here they were building a new section of the visitor center to house the space shuttle Atlantis along with lots of information about the shuttle program.  This year, it’s open!

The shuttle is on display with the payload bay doors wide open and the robotic arm extended.  It was a real exciting thing to be able to walk around it and under it and see it from many different angles.  They also had some great videos in a huge IMAX type theatre and lots of displays about the program, the shuttles, the astronauts, the accomplishments etc.  They even had a shuttle launch simulator that actually made you feel like multiple “G” forces were pressing on you, and then weightlessness.  Not really, but it did feel like it!!

The Kennedy Space Center is just a couple of hours away from Orlando and Disney World, and I think it should be part of any family’s vacation to that part of Florida!

To see pictures of our visit to the Kennedy Space Center in December of 2012, when we took several “Up-Close and Personal” tours of the assembly building, the shuttle launch pad etc., click here.

Here are some pictures we took of the Space Shuttle experience:

We headed across Florida to time a visit to the Cape Canaveral area to see a satellite launch scheduled for December 12th.  Unfortunately, it’s been postponed.

We’re going to visit the Kennedy Space Center while we’re here anyway, as they have a new section of the visitors center that’s about the Space Shuttle program.

We may come back to see a launch while we’re in Florida. 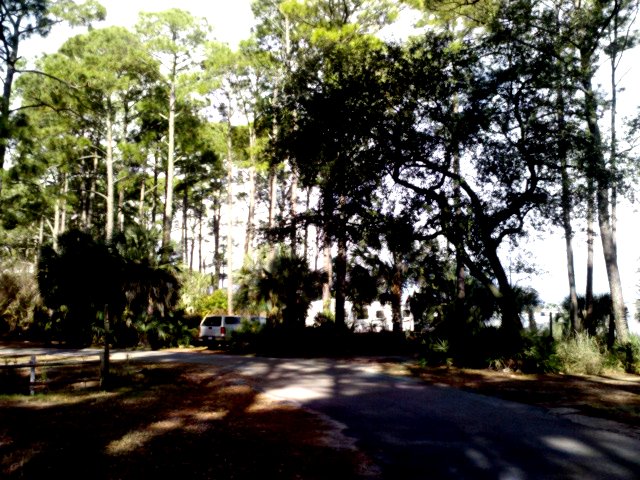 Panama City Beach has a feel of being a real “Spring Break” kind of place.  Lots of places to buy or rent wetsuits, snorkeling gear, bikinis, hamburgers.  Lots of big resorts next to run-down summer rental townhouses.

But driving just a couple of miles to the St Andrews State Park was like driving back into the Florida wilderness.  It’s rustic and quiet here, our site backed onto the Grand Lagoon and had lots of bushes and trees to give a sense of privacy.  There are several white-tail deer that live right in the campground, we saw them every day.

Here’s my review of this park: http://rvparkreviews.com/regions/Florida/Panama_City.html#CGID772,

and here are a few pictures of our site:

We were hoping to find a dog beach while here in Panama City Beach, but there’s only one beach where they allow dogs at all, and they must be leashed.  But, we found a really nice dog park in town.  Here’s my review of it on BringFido.com: http://www.bringfido.com/attraction/9931/#reviews

We saw a great Thai restaurant here in Panama City Beach and decided to try it.  We both were very happy!  We were surprised to find that they had as much Japanese food and sushi as Thai food.

Here’s my review of it on Yelp: http://www.yelp.com/review_share/30IuXOzU3mEaZ9gVbo0Q0A/review/UBQ71dLNw-l6_3ldzXMp7w?fsid=loLR24uhPrSJXGqQT9vpvA