We spent a week in Casa Grande, AZ visiting family.  We had a good time and really enjoyed catching up with what everyone here is doing.

Here are a few pictures:

While in Livingston TX, our “home base”, we decided to weigh our rig.  That’s always a good idea and we had put it off for two years.  We weren’t worried about being overweight, even in a light trailer like we have.

These weight numbers give a real good picture of exactly the load that is being carried – is the front heavier than the rear, is the right side heavier than the left?  Are the tension bars at the hitch being pulled tight enough to put more weight on the front of the truck than the rear?  All these questions are answered by the Smartweigh process.

We found that we need to pull up the tension bars more, as the rear axle of the truck is carrying more weight than the front axle when we are towing.  We also found that the left front tire of the trailer is carrying more than the other three tires.  We aren’t too surprised at that as Jeff built two dinette benches to replace the four wooden chairs that came with the trailer.  The benches are thin plywood with 2×4 braces and are covered with bamboo flooring left over from our kitchen remodel.  They look nice, are comfortable with padding, and have storage inside each one.  However, they do add to the weight carried by that front left tire.  We don’t want to get rid of the dinette benches, but we did transfer most of the heavy items stored there to the back of the trailer under the bed.  We had room and this balanced the load better.

And, we learned that because we aren’t carrying the full weight that the trailer is designed to carry, we have overinflated the tires by keeping them at the highest pressure they are intended to carry.  A suggestion was given to us to reduce the pressure a bit so the tires aren’t so rounded as that will cause wear on the tires in the center of the tread.

We stopped for a few weeks to visit our family in Picayune MS.  We had a great time with the grandkids!  They’re all growing up too fast.  I won’t say much about them here in this ‘public forum’, but here’s one picture of the family: 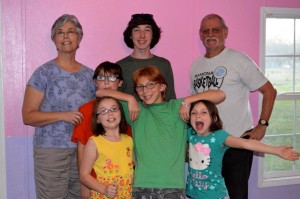