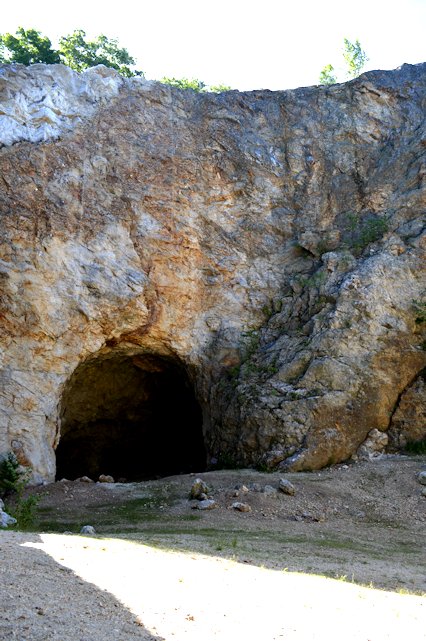 While staying in Brattleboro, VT we saw a brochure for a mine that had mined for mica and other minerals for many years.  We decided to take a day trip and go see it.

It’s called the Ruggles mine, and mica was first found there in 1803.  During the next 150 years the mine was in operation.  Mica is a mineral that can be flaked off in very thin, almost transparent sheets.  It was used for many years in lanterns and as oven windows so the cook could see that the fire was burning.  For many years the material was carted down from the remote location of the mine in secret trips in the middle of the night to avoid having others know where the mine was.  In the mid-1900s mica started to be imported from Brazil and was much cheaper than that mined in the U.S., so production fell off.

When the mine stopped operating it was re-opened as a tourist attraction.  People can now go into the mine and bring or rent tools to do their own mining.  Any minerals found can be kept.

We had a lot time looking around at the various rock formations and watching children tap on the rocks and bring interesting samples to the guides who could tell them what they had.  We didn’t use a hammer but we picked up some interesting samples of mica, citrine, feldspar and quartz.

Here are some pictures we took of the mine area: 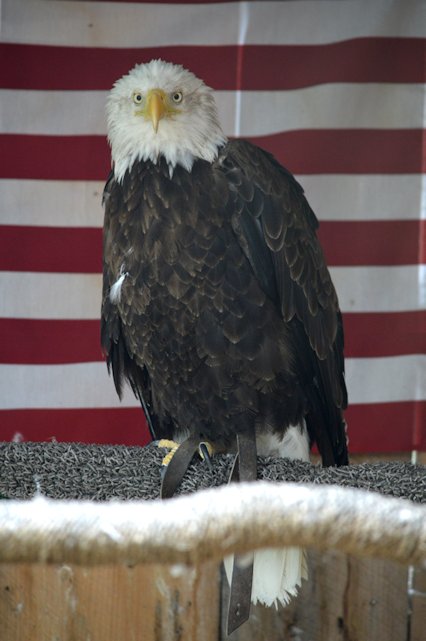 While staying in Brattleboro, VT we took a trip to the nearby Museum of Natural History.  This is a private non-profit museum and is located near a skiing area on a mountain near Brattleboro.  It was a great drive up to the location!

The exhibits are mostly birds and other animals of the area.  Most are stuffed with information about each exhibit.  They have a section for live raptors with a bald eagle, a kestrel and several owls.  It was interesting to see the live birds, but I was sad to see them in small cages. 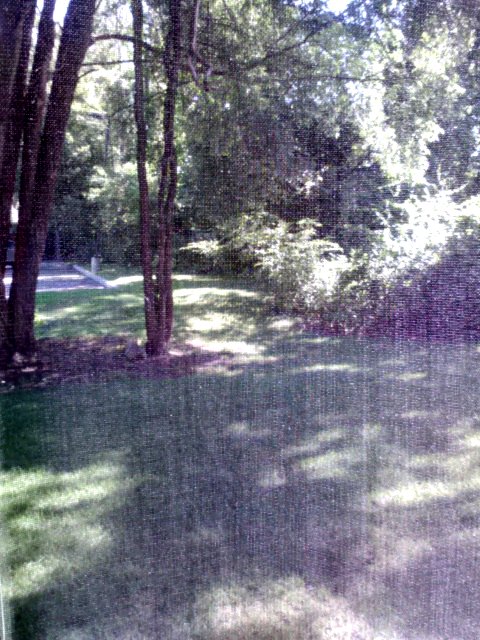 While our trailer is being repaired from the damage done on the road 7/8/14, we are staying at a “Super 8” motel in nearby Brattleboro, VT.  Since I’ve just started a new section of our blog to show the views from our front doors…which I expect will mostly be beautiful scenery…I am showing what we look at from the motel.

Since the front door is into a corridor, it’s not such a great view.  We are in the back of the motel though and our (only) window looks out to grass and trees and part of the parking lot from the Wendy’s next door.  But at least it’s not on a walkway and parking lot as most motel windows have!!

Here are the views from our motel:

We were on the way from south NH to central NY on July 8th and were barely 1/2 hour along the way when we heard a horrible noise and shaking from the trailer.  I looked in the rear-view mirror and saw debris flying onto the freeway.  OH NO!!

Our trailer’s rear tire on the passenger side had come apart, throwing the tread up into the trailer floor before it spun off into the roadway.  The damage that tread caused inside and outside the trailer made it look like a bomb had gone off!

Just above the wheel well is the shower stall, a cabinet containing the water pump and inverter, and a small cabinet housing a bbq.  The shower stall was demolished!  The floor part (pan) was blown apart and from the bathroom you can see the ground.  The bottom of the cabinet next to the shower was blown apart and the water pump was dangling, with electrical wires and water pipes hanging out.  The cabinet containing the bbq which is in the living room had blown apart, throwing insulation and debris all through the living room.  The bbq was damaged and bent.  The skirting on the outside of the trailer just behind the wheel was gone, it’s now somewhere along the freeway.  The wheel well skirt was damaged.

The tire itself still held air, which was very surprising.  Just the tread had come off and had caused all that damage.

So, major change of plans!  AAA came out and put on the spare tire (we don’t have a jack that will lift the trailer), and the AAA guy and Jeff determined that the trailer could still travel after some hanging debris was cleared away.

We contacted a local RV repair shop and took the trailer there.  He was surprised at the amount of damage as well.  We also contacted our insurance company and two days later as I write this we are still waiting for the insurance computer to send someone out to inspect the damage and make a determination of whether they’ll cover it (I sure hope so!!) and how much it should cost.  We’re expecting that it’ll take 2-3 weeks to get all the repairs done.

In the meantime we’re staying at a motel nearby – we had to travel about 20 minutes from the RV repair shop to find a reasonably-priced motel that takes a big dog without charging an exorbitant extra daily rate of $20.  We found one and for a while we’ll be living out of an even smaller space.  Luckily, it has a small frig and microwave, so we aren’t stuck eating 3 meals out every day!

Update: it took 4 1/2 WEEKS to get the trailer repaired!  The insurance adjuster took 1 1/2 weeks to get out there to inspect the damage and then write his report.  Then, it took over 2 weeks to get the parts ordered  and then when they arrived a major part was damaged and had to be re-ordered.  We stayed in that motel room for 32 days!  Luckily, the RV repair place did as much work as they could while waiting for parts, and once the parts came in just a couple more days to get it finished and back to us!  See my review of New England RV Repair.

Here are some pictures of the damage to the trailer, including a couple showing the rip in the floor after the debris was cleaned up: 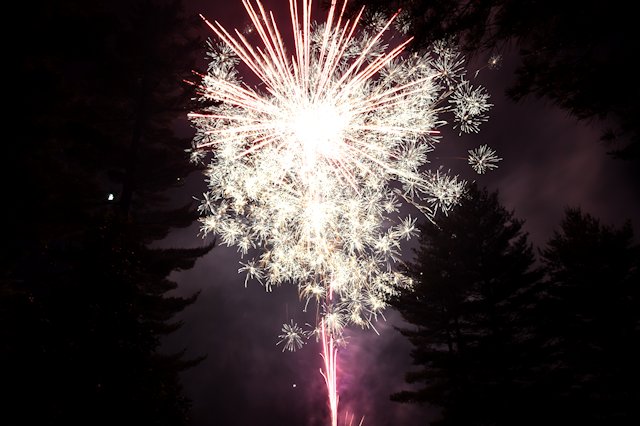 We were staying at an RV Park in southwest NH over the Fourth of July.  The RV park had a nice lawn and beach area on a lake, and they hosted a real nice firewords display on the fourth.  Since it was raining the evening of the fourth, we really had it on the fifth!

It was really nice to see fireworks with a small crowd of about 100 people, in a casual setting.  We’re both used to big fireworks displays along the beaches or at a stadium with huge crowds, traffic jams, get a spot early in the day and WAIT till dark, ugh!  This was much better!

Here are some good pictures Jeff got of the fireworks:

The area around Swanzey, NH has several covered bridges that all span the Ashuelot River.  We drove to 6 of them and took a few pictures.  They were all built or rebuilt in the 1800s and are all very picturesque.  In addition to our pictures, here’s a link to a website that lists them all along with information about date and cost of each: http://www.nh.gov/nhdhr/bridges/intro.html.

We stayed for a week in south-central New Hampshire just to relax and see the area.  The campground is great!  Here’s my review of it on Yelp: http://www.yelp.com/biz/swanzey-lake-camping-area-swanzey?hrid=Ij8U52Jo2fGtZdJBYVKH2A

We visited Medway ME just for the chance to see what the interior of Maine was like.  We stayed at the Pine Grove Campground and really enjoyed it.  It is a rustic campground, with large sites and we had one right along the river.  Here’s my review on Yelp: 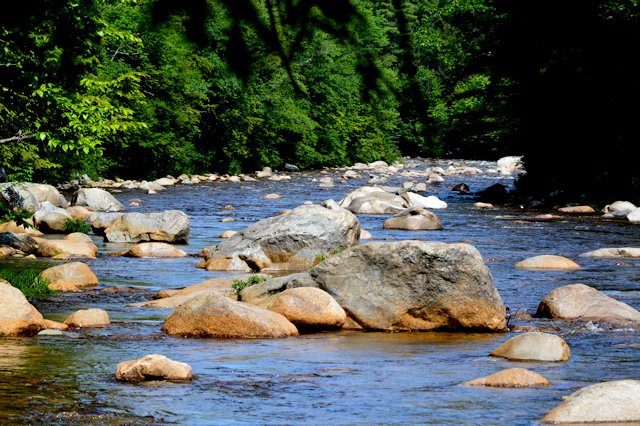 So, we looked around for something else to do on Sunday.  We discovered that we were very close to the White Mountains and Mt. Washington, the highest point in NH, and that there was a road to the very top of the mountain with an observatory.  So we decided to drive up the mountain.  NO!  The road was closed as there was a car race happening.  So, instead we took a drive through the White Mountains area which is very pretty!

The whole area was formed by glaciers, and the owner at the RV park explained that the various narrow long ridges are called “notches”.  We drove through a couple, where there was mountains on either side and the space between would get more and more narrow until you were going through a very narrow notch – then it would open back up.  The movement of the glaciers past the mountains made some very interesting granite cliffs.  Here are some pictures of the Swift River and the granite mountain sides: 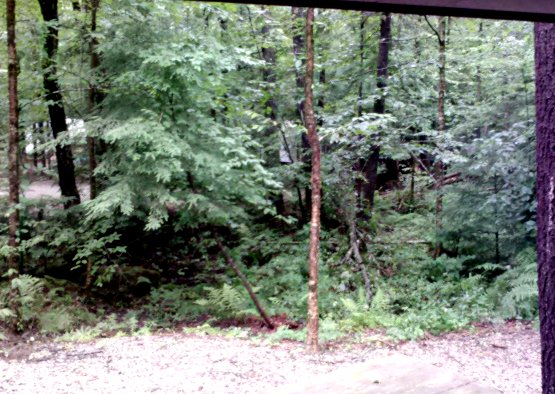 Here’s the view from our front door in Swanzey, NH.  Days have averaged around the low 80s here and nights in the high 60s.  We had heavy rain the afternoon of 7/3 and most of the day on 7/4.  Otherwise, beautiful! 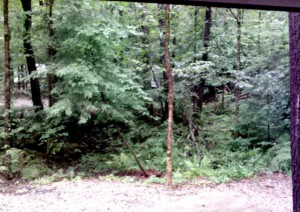