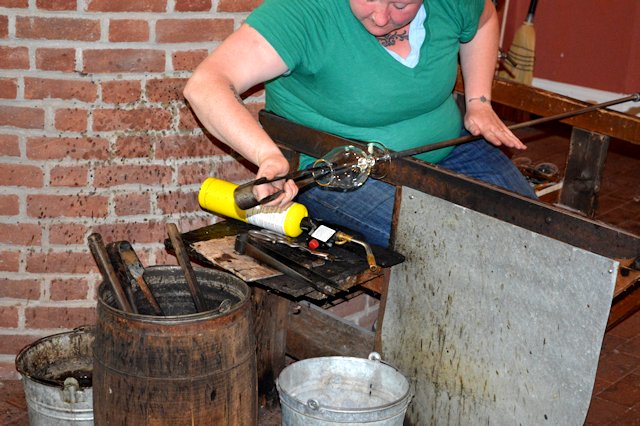 While on Cape Cod we visited a glass museum containing lots of glass lamps, dishes, and other items from the early days of Cape Cod.  There was a lot of really beautiful items and we learned a lot about how glass dishes and items are made and how molds, colors etc. are used.

While there we watched a glass-blowing demonstration where a lady who had been working as a glassblower for over 11 years made a wine goblet.  It was real interesting!

Here are some pictures of the process: 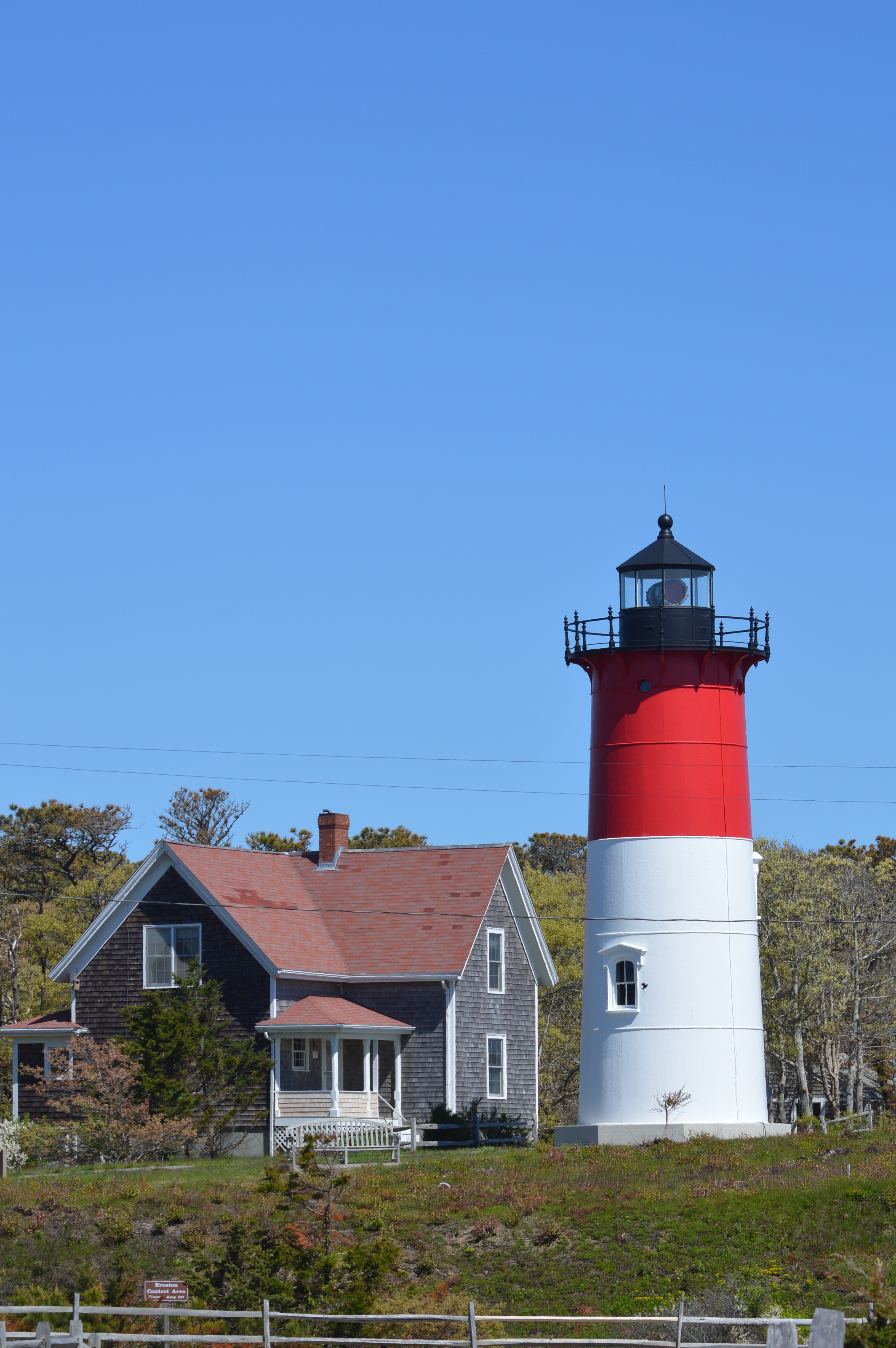 We’re in Cape Cod now for a couple of weeks and are really enjoying the beautiful area here.  We drove up to the very tip where there’s a small town called Provincetown.  If you look at Cape Cod as an arm with an elbow and wrist and the had is in a fist, Provincetown is where the fingers would be.  The pilgrims actually landed here before arriving at Plymouth, and spent a month resupplying.

We also drove along some of the shoreline and saw some people out clamming at the low tide.  There were some boats laying on their side in the mud and some trucks and cars out in the sand while people dug for clams.

We visited a lighthouse on the Atlantic side that had to be moved in 1996 due to the shoreline eroding.  It took them 7 months to lift it up off the foundation and roll it carefully about 100 yards to its new home.  We didn’t go up to the top of the lighthouse, unfortunately, because you had to schedule some time on a tour and we didn’t want to wait.  Oh well!

Here are pictures we took: 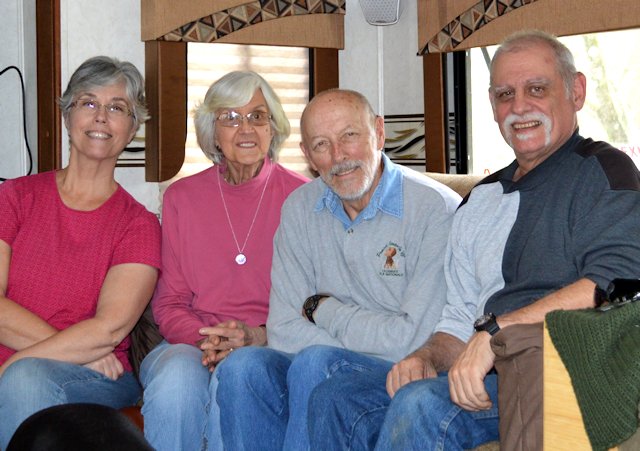 Jeff’s aunt Lois and uncle Tony live in northern New Jersey, so on our way up the East Coast we stopped there for a couple of weeks to visit.

We had a great time visiting with them and seeing Jeff’s cousin Leslie and her husband (also a Tony).

Here’s a picture of us with Lois and Tony when they came to see our trailer: 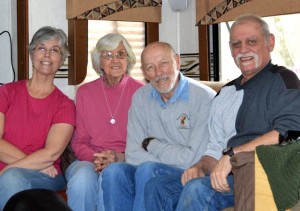 While in New Jersey we stayed about 40 minutes away from Uncle Tony and Aunt Lois.  There aren’t that many campgrounds in the area and this was the closest one that would take Laddy.

It was a very nice RV Park; the one drawback was NO TV!  We solved that when Aunt Lois lent us several DVD movies so we would have something to watch in the evenings.  Yea!

Here’s my review of the park on Yelp: http://www.yelp.com/biz/fla-net-park-campgrounds-flanders?hrid=eNAFWD7aRLZ4V9ObFInIsw

Our first day in Cape Code we went to a local seafood place in Brewster where we’re staying.  The first place we stopped at wasn’t open for the season yet 🙁 – so we kept driving and found JT’s.

It was great!  Here’s our review on Yelp: http://www.yelp.com/biz/j-ts-seafood-brewster?hrid=xm83b-YErRQD49tORDb37A.

We stayed for 3 weeks in Washington D.C. so we could see all the sites without rushing.  This was a great place to stay.  A bit pricey compared to other areas of the country, but for a large metro area it wasn’t bad.  Here’s our review of the park on Yelp: http://www.yelp.com/biz/cherry-hill-park-college-park?hrid=htSJaIfUA2IA6U4YanaoCA 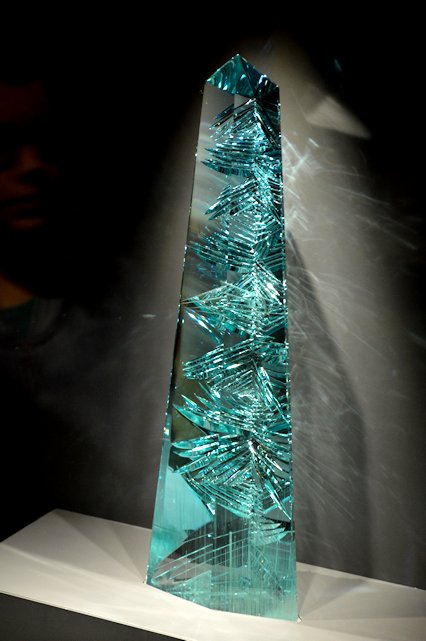 We visited the Natural History museum in D.C.  we were impressed with the Gem and Mineral collection and with the Dinosaur exhibit, but frankly were disappointed that there was just one mummy and it wasn’t very impressive in the “Egypt” exhibit.  Oh well.

As I said, we were impressed with the Gem and Mineral exhibit.  They had a huge collection of gems and minerals and some items were quite large and beautiful.  And, they have the Hope Diamond on display.  Wow! 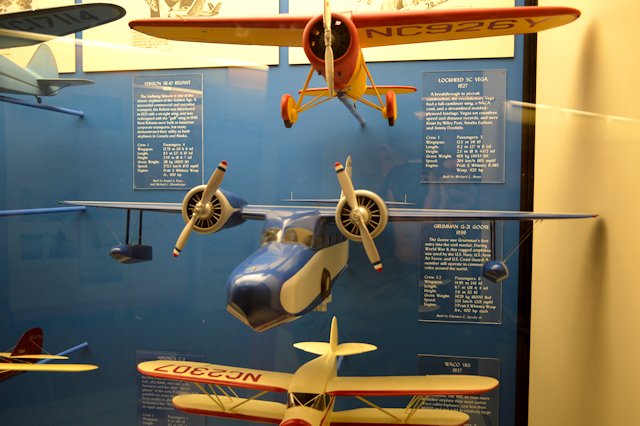 A museum in Washington D.C. that Jeff really wanted to visit was the Air and Space museum.  They have a large collection of airplanes and jets and different sections for the different ‘eras’ of flight.  It was very interesting.

In addition to the exhibits, we saw a 25-minute film called “Dark Matter” that talked about…dark matter.  I won’t even try to explain it here, but it was real good and was narrated by Neil DeGrasse Tyson who also narrates the current TV series “Cosmos”.

We visited the Museum of American History museum in D.C. which is part of the Smithsonian.  It was very interesting, a part that I enjoyed showed a home that was built before the Revolutionary War and is still standing.  During recent renovations, they identified added-on parts to the house, old roofing material and wallpaper etc. and the exhibit showed rooms and construction material as it would have been used and appeared at various times throughout the house’s history.

The museum showed what life was like for Americans throughout the history of our country.

Jeff enjoyed the full-size train engine, and the model ships and that’s what he took pictures of.  Here are a few: 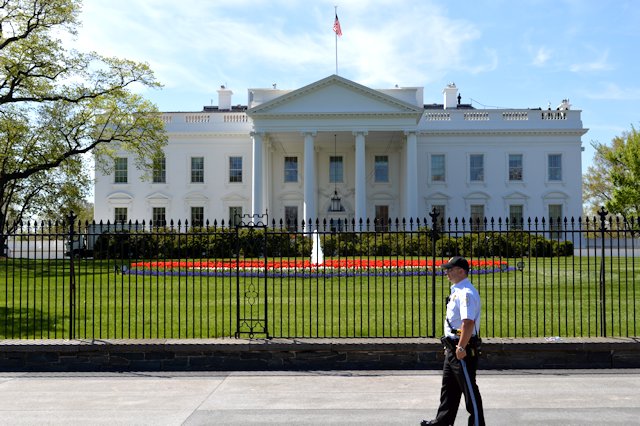 We walked past the front of the White House just to be able to say we did.  Pennsylvania Ave that runs in front of it is closed to traffic for 2 blocks in either direction so you have to walk!  And, the sidewalk has guards every few feet so you have to walk in the street.  We didn’t get a glimpse of anyone, not that I thought we would.  There was a demonstration going on in the street in front but as it was in a different language we had no idea what was going on with that.

Here are a couple of pictures we took: