We had several chances to catch up with Emilie and her partner David while in the Atlanta area.  We enjoyed visiting with them and got to meet their 3 dogs.  Unfortunately, we forgot to get any pictures of them, darn it!

We stayed in Charlotte, NC, to visit with Jeff’s sister Merry and part of her family that lives there in Charlotte.  We had a good time visiting with them.  Here are some pictures: 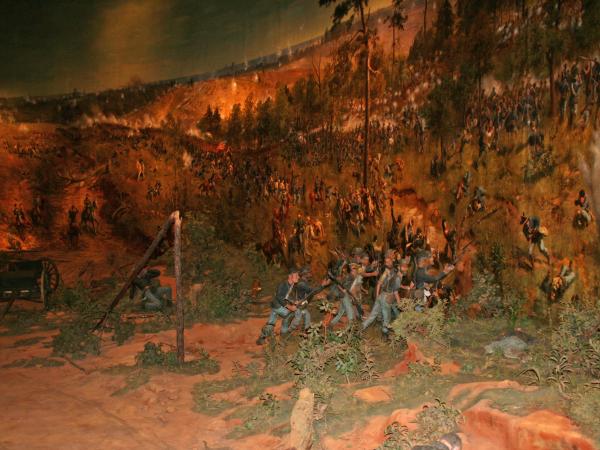 While staying here near Atlanta we went into the city and visited the ‘Cyclorama’, which is a great local attraction.  It consists of the steam engine named “The Texas” which chased the train called “The General” during the Civil War “Great Train Chase”, and the Cyclorama, which is the largest oil painting in the world and is the scene of the Battle of Atlanta fought in July of 1864.

The painting, if laid out on the ground, would cover a football field!!  It’s mounted on the wall in a circular building made specially to hold this painting.  There is a small theater in the center of the building and the theater rotates to give a 360-degree view of the painting.  There is a diarama in front of the painting to give a 3-dimensional effect to the entire visual picture.  Special lighting and a narration during the approx. 30 minute rotation tells the story of the battle.

Two very interesting facts – the oil painting was done in 1867-1868!  Just a couple of years after the battle itself.  It’s been very carefully preserved all these years and is regularly cleaned.  The whole building is designed to help preserve it.  The second interesting fact is that the human figures in the diarama appear to be life-size but they’re just 12-42 inches high!  It’s impossible to tell – we could have sworn they were life-size!

We couldn’t take photos of the painting, but I took a couple from their website (http://atlantacyclorama.org/index.php) to include here.

When we got together with Jeff’s friend from college we went to a cajun restuarant, Pappadeaux’s Seafood Kitchen.  It’s a real nice restaurant and Jeff felt the Shrimp Creole was doing really well.  Lynne and I both had the “skinny salmon” (no sauce) – YUMMY!

Here’s my review of the restaurant on Yelp: http://www.yelp.com/review_share/gAze3qbX9r7Hjc1ciO44xw/review/Q7ZJ9HQLTqrL9Yb4wKA3rw?fsid=GRARY6ri7DAw4oT1m4xXdg

Our RV park here in Marietta is nice as it’s close to a state hiway and interstate, but has the feel of being in the woods.  We’re enjoying staying here!  Here’s my review of the Atlanta-Marietta RV Resort on Yelp: http://www.yelp.com/review_share/s6HnHdZJVK7MMMjqo4CbNw/review/Qw9u4Uv2Yj0iHoPfH-Ir3w?fsid=VAHbdn4f1e5KpCeFCHX3aw

The RV park where we’re staying in Marietta doesn’t have an off-leash area or even a field nearby where Laddy can run around, so finding a dog park is important.  We found two within a few miles, one with bark/mulch (yuck!) and one with grass.  Here’s my review of the grassy dog park on BringFido.com: http://www.bringfido.com/attraction/2855/#reviews.

While Jeff was attending Tulane, he dated a girl for a couple of years who was attending Newcombe.  Lynne was from Atlanta and still lives here, so while we’re here we met Lynne for dinner.  It was nice for Jeff to reconnect with a college friend; they talked about other friends that one or the other of them has stayed in touch with and they shared memories of their time in college.  I like Lynne! 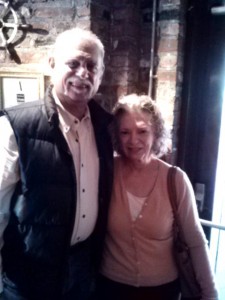 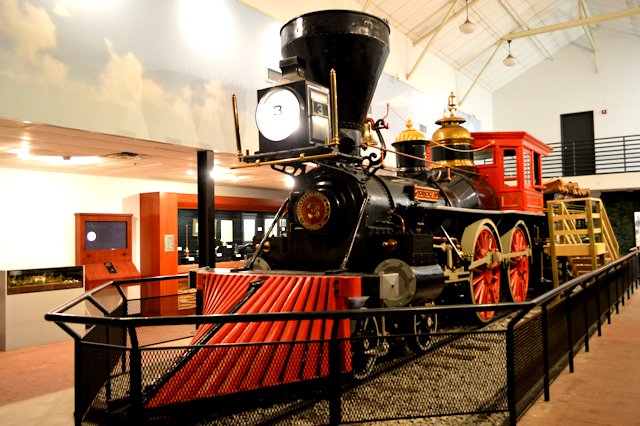 While staying in Marietta, we visited the Civil War and Railroad Museum.  It contained a lot of artifacts and information about the Civil War and how it impacted the local area, with an emphasis on “The Great Railroad Chase”.  I’d never heard of it, although Jeff had, and it was the subject of a few movies over the years.  Early in the Civil War, Yankee generals wanted to cut the supply lines to Atlanta hoping to cripple the South and shorten the war.  Twenty-two volunteers infiltrated the south disguised as civilians in groups of two and three.  They met up at a train station outside of Marietta and boarded.  When the train stopped at the next stop all the passengers and most of the crew deboarded as it was the breakfast stop.  When that happened, the 22 Yankees detached the passenger cars and took off with just the engine, “The General”, and the fuel cars.  The General was a steam locomotive, so it needed wood to fuel the steam engine.

The plan was a good one – the tracks were blocked with the passenger cars that were detached, and the train would head north, stopping periodically for the 22 men to pull up rails and damage the tracks.

But, the conductor of the train that they hijacked ran after them.  Yes, he RAN after them, chasing them on foot for over two miles until he found a train on a siding.  There was only one track, so other trains would pull out onto sidings to let a train past, then they would get back on the track and continue their journey.   The train was headed in the other direction, so the train chased the General backwards!

With a train chasing them, the 22 men couldn’t stop to damage the tracks.  They did set fire to the last car (a wooden boxcar) and left it on the tracks to slow down the chasing train.

The General eventually ran out of fuel and stopped.  Most of the 22 men who ran off into the woods were captured, and several were hung.  Eight escaped and were never heard of again.

How would a successful mission like this have changed the war?  Who knows!

We’re staying at an RV park in Marietta GA, a suburb of Atlanta.  It’s still pretty cold here (for this part of the country), getting up to the 50s during the day and the mid-30s at night.  But, one afternoon we saw a beautiful red cardinal perched in a tree right outside our window.  Here are a couple of pictures:

We spent a couple of days in Unadillo, GA where we visited the site of the Andersonville prison that was in use during the last 14 months of the civil war.  They held over 35,000 prisoners in an area 4 acres big – that’s maybe the size of most Walmart parking lots!!  The men held there were treated very poorly and many died of disease and malnutrition.  When you consider that the residents of the south were also starving to death and dying of disease during the final months of the civil war, it puts the situation at the prison in a different light.

They built the national POW museum on the grounds of the Andersonville prison which was very interesting as well.  They had exhibits and artifacts as well as several video interviews with ex-P.O.W.s who talked about their experiences in WWI, WWII, the Korean and Vietnam police actions and also more recent actions in the middle east.