We stopped in Dallas on our way east to visit an old friend of Jeff’s and while there we went into the city to see the spot where JFK was assassinated.  The building where the Book Depository was at has become a museum with a lot of information about the event, the photographers, the conspiracy theories, the trial etc.  It was very interesting.

They had glassed around the window where Lee Harvey Oswald fired the shots, but from the next window over we could see the line of sight that he used to fire down onto the motorcade.

We also walked around on the ‘grassy knoll’ and the street, which is marked with “X”s to show where the president’s car was at for the shots.

Jeff and I are both convinced that Lee Harvey Oswald could not have fired three shots in such rapid succession with the precision that would have been necessary to account for all the hits to JFK and Connelly.  The single-shot, bolt action, rather clunky rifle that he used…the different angles of the three shots…just doesn’t work!

Here are some pictures we took of the area:

Several years ago when San Diego had a hockey team we enjoyed going to see the Gulls play hockey.  What’s that old joke…”I went to a fight and a hockey game broke out”?  There are lots of fights at hockey games!!

While in Oklahoma City we saw that they also have a minor league hockey team and they played Saturday night.  So we went to the game!

We had a lot of fun!  Here’s a picture, and here’s a short video I took of the action that I posted on Youtube: http://youtu.be/lYxyOYRBavU. 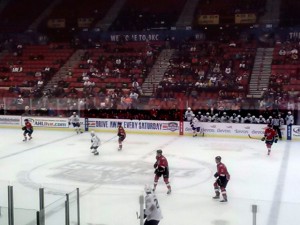 While in Oklahoma City we visited the memorial built on the site of the Alfred Murrah building that Timothy McVeigh bombed in 1995.  They demolished most of the building and constructed a memorial on the site.

There’s a small portion of the original outer wall remaining and it shows damage from the bomb.  In the space that used to be the building, empty chairs were erected naming the victims of the bomb.  Smaller chairs signify the children that were in the day care.

An elm tree that was in the parking lot across the original street from the building still stands and is called the Survivors Tree.  After the bombing it was surrounded by burning cars.

The original building faced NW 5th Ave.  That street was closed down in the block where the bomb went off and is now part of the memorial.  There are two entrances to the memorial, one at each end of the block.  One is inscribed with the time 9:01 – one second prior to the bomb going on.  The other is inscribed with the time 9:03 – one second after the bomb. 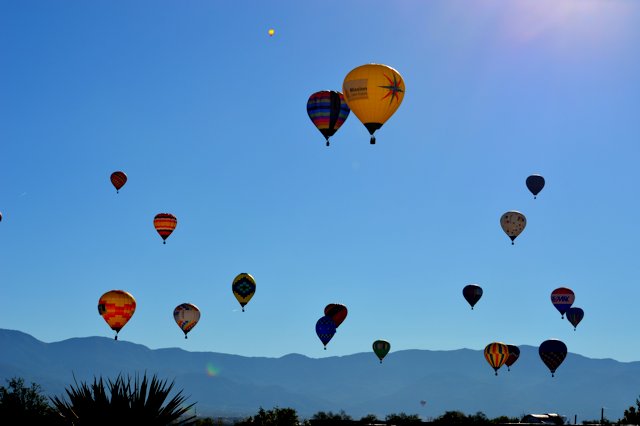 We didn’t plan on it, but we got to Alburqueque while the annual Balloon Fiesta was going on.  We didn’t plan it that way, but it was great to be able to see the world-class event!

We didn’t pay to go into the field where the balloons take off – wait in line to get to the parking area, pay to park, walk a lot, pay to get into the field, walk some more, ugh!  So, we just drove around the city and got some great shots!  Here they are:

I ate at this restaurant near the courthouse in Vista a couple time while in Vista visiting family.  I think it’s the best place for Thai food I’ve ever gone to.  Yum!

Here’s my review of this restaurant on Yelp: http://www.yelp.com/review_share/d_yH5eKEQQTwsfYS9O7V4g/review/rpiMWjjZGPNYhWqAoYsIbA?fsid=SM-0cd73enlLgYcNp8xprQ

We went out for authentic New Mexican food while in Alburqueque and chose Garcia’s Kitchen.  It was REAL GOOD!  Here’s our review of it on Yelp: http://www.yelp.com/review_share/It9jXStRIH3cHgf_9ft8SA/review/nqWn_-0cZt4Cz35FcJUnjw?fsid=TlbYczeBg9ZxYx_TviH-Nw.

We shortened our stay in Flagstaff since all the national parks were closed.  The morning when we left it was snowing!  Brrr!  Not a lot, but it was also windy which made it feel even colder.

Here are a few pictures – you can see the snow falling on our neighbors RV if you look closely.

Since all the national parks are closed while we’re in Flagstaff for this visit, we went up to the Lowell Observatory instead.  This is one place neither of us has ever been to…and while Jeff’s been to Flagstaff once, I’ve been about a dozen times so I’m surprised I never came up to the observatory before.  Too many other great things to see here I guess.

The observatory that visitors can see is the original dome, built in the 1890s by Percival Lowell.  He was from a wealthy family and built the observatory with his own money, in order to study Mars.  He was convinced that there was a civilization on Mars, as was the popular belief in that time (have you ever read A Princess of Mars by Edgar Rice Burroughs?).  He put in a 24-inch lens (common for the time) and studied Mars for many years until his death in 1916.

If you look at the attached pictures of the inside of the observatory, you’ll notice a row of tires around the rim.  This was an innovative solution to a problem from the early years of the observatory.  As you many know, the dome has a thin slit through which the telescope can see the skies.  The whole dome rotates to give the view desired by the astronomers.  The dome on the original Lowell Observatory was rotated on a series of metal wheels which would stick a lot.  Inserting the tires allowed the dome to rotate easily and smoothly.  Periodically the tire pressure is checked and inflated as needed, and also periodically the tires go bald just like on a car and have to be replaced.  Since they are 1954 Ford truck tires, it’s not easy to find replacements any more!

The observatory continued to function through family money and in 1930 Pluto was first seen through that 24-inch telescope!  You couldn’t see any details – they discovered it by filming that section of the heavens over several nights and observed something that moved in a trajectory that had been theorized as “Planet X” based on the gravitational pull that was exerted on other bodies in our solar system.

Today the working observatories are a few miles away from the original, due to lights from the city.  They are currently building a new Discovery Channel Telescope which will see what today only the Hubble telescope (built in space) can see.  WOW!

We had decided a few months ago that when we headed east we would go north from Casa Grande and visit Flagstaff again.  We were here back in 2000 and saw many of the great natural sights in northern AZ – the Grand Canyon, the Meteor Crater, the Sunset Crater volcanic area, the Wupatki Indian ruins, and others.

Well, the government shutdown has closed all of the natural wonders in northern AZ, right at the time we showed up!  Dang!

We know we’ll be in northern AZ again someday, so we’ll get another chance to see all the great sights here.