We’re in the Ventura area this week, staying at a KOA in Santa Paula which is just outside of Ventura.  This is a lovely KOA area, lots of trees and space, and teepees, tents and cabins in addition to RV areas.

One of the attractions in the campground is a group of peacocks.  Several females and at least 2 males.  One strutted around this morning showing off his beautiful tail and Jeff got several pictures. Laddy shows quite a bit of interest in these large birds as they wander through the camp area, and he and Jeff got within a few feet of them one day.

On our last day in Vista my sister Sam drove up to join us and we had a fun day together.  Here’s a picture of the four of us. 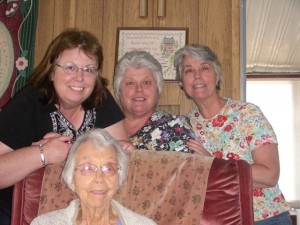 Gaujome County Park is beautiful, but they impose a maximum stay of 21 days.  Since we want to be in Vista with our families for 4 weeks we had to move to another RV Park.  We went to Champage Lakes RV Park, just a couple of miles north of the Lawrence Welk Resort on Interstate 15 in North San Diego County.

It’s also a beautiful and rustic setting.  There are three lakes, lots of trees and lots of peace and quiet.

Laddy sees many small animals during his walks.  When he sees a squirrel he wants to chase it and when he sees a bunny in the grass he turns into a hunting dog, moving very slowly with his head down towards the little critter.  Of course he can’t catch them as he’s on a leash, but it’s obvious he wants to!

Yesterday we were relaxing in the trailer a bit before dinner when a bunny rabbit hopped out from a bush right next to Laddy’s window and started nibbling on the fresh grass there.  Laddy noticed him and sat up straight and watched him hop around a little and nibble.

After a few mninutes a squirrel came out from the bush too and started looking around for nuts.  Laddy sat very still and watched them both intently!  Here are some photos (I’ve adjusted the area around the bunny and squirrel so they show up in the photos): 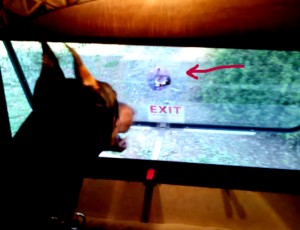 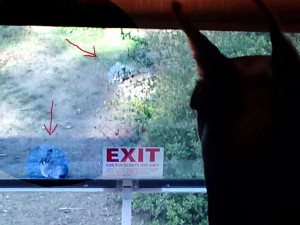 We’re in Vista now, close to my Mom and sister and Jeff’s dad.  Also pretty close to where we started from, which is giving us a chance to visit with friends.

No pictures or sightseeing for us while here.

We’ll be leaving this area about the third week in March, so come back to see where we’re headed next.

See ya, Paula and Jeff