When we visited the NASA Kennedy Space Center visitor center we learned that they were offering some “Up Close” tours that are usually not offered.  Jeff is very interested in rockets and NASA so we chose to take two tours.  The first tour we took was of Launch Pad 39A.  Except for Apollo 1 (which blew up on the pad) every manned flight, every moon flight, every shuttle flight has taken off from Launch Pad 39A.  Until these tours started recently, no civilian and very few NASA workers has ever been as close to the launch pad as we were.

This first picture is of us with the launch pad behind us.  It’s hard to imagine how massive it is until you’re right there. 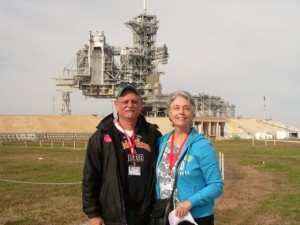 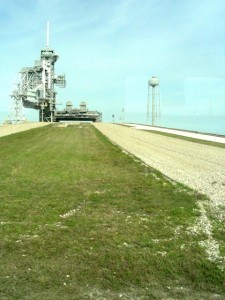 Here are a couple pictures of the launch pad.  Notice that there appears to be a section that is anchored at the base, and then there’s a section on the left that isn’t anchored.  When the shuttle and the rocket that it’s attached to are put into place, that left section closes around it to provide stability while it’s standing there and as it starts to launch.  Also notice near the center of the photo there’s a small white box.  That box is where the astronauts walk through to get to the shuttle.  That little box holds all the astronauts plus several people that help them get ready to board. 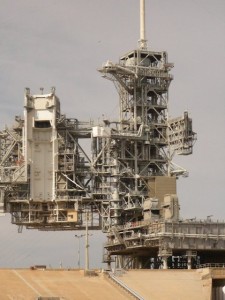 Here’s another picture of the launch pad: 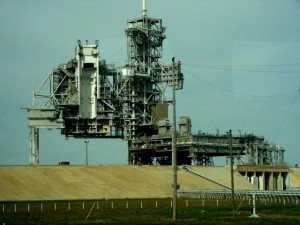 And, we were then taken to the back side of the launch pad where we could see underneath the pad.  When the rocket launches, I’m sure you’ve seen video of the flames and white smoke along with the shaking and tremendous noise of the rocket firing.  The white smoke is actually steam from the sound-suppression system which pumps hundreds of gallons of water into the flames.  If not for the sound-suppression system every animal and human standing within a mile of the launch would be killed by the soundwave!  The flames and water are channeled through the bottom of the pad where we were standing to take the picture, and channeled to holding tanks.   We could see how scorched the area was from the flames from so many rockets that were launched on Launch Pad 39A.

Next we’re going to tour the Vehicle Assembly Building.  This tour will stop at the end of the year (tomorrow!) because they’ll be starting the remodel of the building for the next type of rockets that will be launched.  The shuttle program has ended, but not the space program!

We’re in Merritt Island, FL now.  It’s on the Atlantic Coast and is where Cape Canaveral and the Kennedy Space Center are.  This part of Florida was chosen as the site for almost all of the rockets, manned space flights and shuttle flights for three reasons: 1) it’s on the Atlantic coast which gives a buffer of safety for any flights as they rise through the sky in case of failure (they’ll crash in the ocean), 2) this part of Florida was relatively unpopulated in the 1950s and NASA was able to get a huge amount of land for their needs.  Most of the land is a natural wildlife refuge as they only use small portions of the land they were given! And, 3) it’s near the equator which gives an extra boost of power as a rocket or ship takes off.  I can’t explain why that is so – any techie folks will have to look this up!

Anyway, we went out to the Kennedy Space Center and got to see lots of exhibits, tour the area to see the launchpads, assembly building etc.  Very impressive stuff!

Jeff is very proud to be able to say that two of the early astronauts are alumni of his high school (Admiral Faragaut) – Alan Shepart and Charlie Duke.  And…they both walked on the moon!  They didn’t attend at the same time as Jeff but still – no other high school can claim two astronauts as alumni!  The high school (also here in Fl. in St. Petersburg) was given a piece of moonrock by the two alumni astronauts – worth millions of dollars!

Here are some pictures we took on our first visit to the Kennedy Space Center:

In this part of Florida we’ve seen several Banyan trees.  They are in the same family as a Fica tree, but have the unique attribute that the branches put down roots as well as the base of the tree.  The branch roots snake down into the ground and often bundle with other roots.  There are several here at the RV park, and a very huge one at the Lighthouse grounds that we visited.  Our guide told us the largest banyan tree in the world is in India and covers over 11 acres! 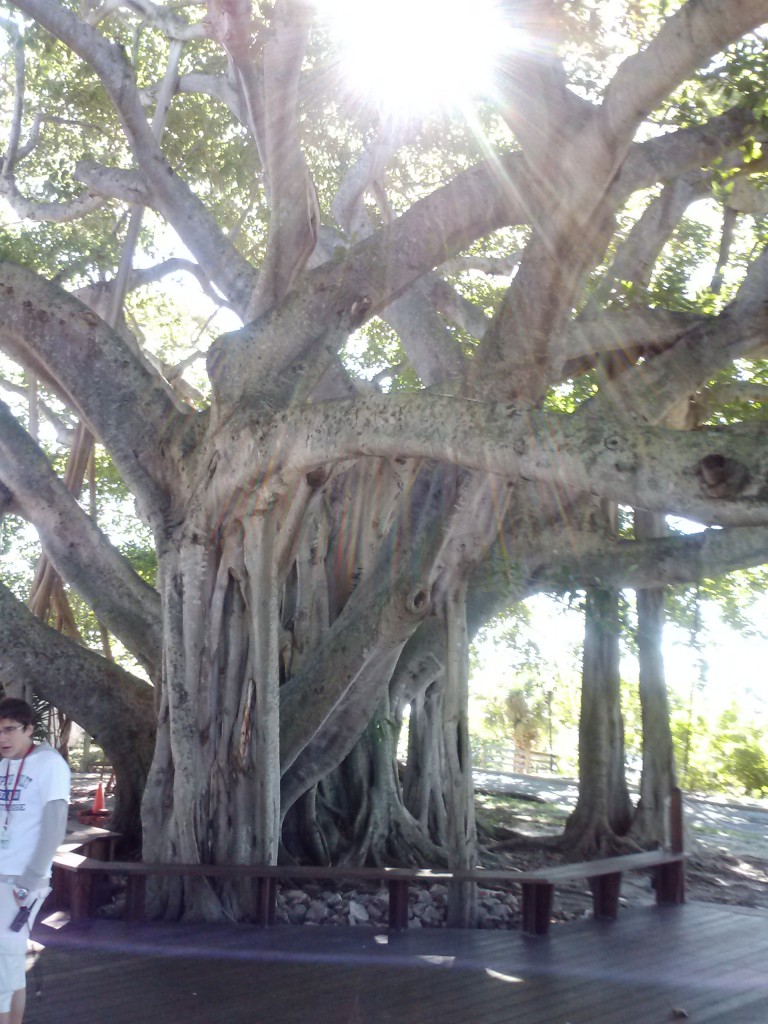 We visited a local landmark today – the Jupiter Inlet Lighthouse.  It was built in 1860 and during the construction there were several battles with the Seminole Indians in the area.

This site is fairly unique among lighthouses as it’s 1/2 mile inland from the ocean.  But, it’s up on a sand dune and also has the highest rated prism that can transmit the light 15 miles away.  The light source is only a 1000-watt bulb (originally they used a whale oil lamp) but the prism causes the light to be seen so far away.

It’s at the most eastern point in Florida, south of this area the shore curves, so this was a very dangerous area for ships who would sail along at night and not realize they were getting to close to the shore.  There are a lot of shipwrecks in the area because of this land feature, giving the area names like “Treasure Coast” and “Gold Coast”.

We climbed to the top of the lighthouse – 105 steps the guide told us.  He forgot to mention the 42 steps to get to the BASE of the lighthouse (because of the sand dune) so we had a good climb!  Here are some pictures:

We traveled across Florida on Monday from the gulf side to the Atlantic side.  We’re now in Lake Worth, a suburb of Palm Beach.  It’s very warm here, high 70s or low 80s during the day and mid 60s at night.  It’s not too humid this time of year, so it’s very pleasant!

We went to the shore so I could see and put my feet into the Atlantic Ocean this morning – I’d never been to the Atlantic!  We had to go for miles through private beaches attached to huge mansions before we finally found a public beach!  I was surprised at how small the waves are here – the biggest waves weren’t even 2 feet!  Here are some pictures of the Atlantic:

We stayed at a state park in Zephyrhills, very pretty and rustic.  There was a river (Hillsborough River) that ran through the park and had a canoe launching area.  People who’d been staying at the park for a while told us there was a large alligator in that area and it was seen taking down a full-size deer.  We decided not to take a canoe out on the river!

We also saw a lot of birds.  Mostly egrets which are very common in the swampy areas.  We also saw other birds who stand in the shallow swampy areas and get fish and other small things to eat.  One day we saw a hawk in a tree just above where all the egrets and other birds tended to gather, while he was up in the tree there were no birds standing in the swamp!  Here are a few pictures of birds we saw right outside our campsite:

While in the Tampa area we visited the site of a fort that was built, used briefly and then abandoned during the 1830s.  Fort Foster was along a river that was necessary to provide supplies and men to various places in the area.  There was a massacre by the Seminole Indians at Fort Foster and all but two white men were killed.  One of the two survivors wrote a book which is how the story of the massacre and life at Fort Foster became known.  More men arrived at Fort Foster afterwards and the Seminole were driven further south, but a lot of men got ill during their time at Fort Foster and it was decided that the “air was bad” so the fort was burned and abandoned.  The fort has been rebuilt and is a local tour attraction now.  During the tour that we were on there was a boy about 9 years old who asked a lot of questions – one was about a very low structure within the fort, he asked if it was a dog house and what kind of dog would need such a big house!  Actually that low structure was the black powder storehouse (could be explosive if there was a fire).  We also learned that one of the requirements to be in the army back in the 1830s was to have “two opposing teeth”.  Apparently a lot of men back then had few if any teeth, and to load your gun you took a little paper package containing the black powder and ball, tore it with your teeth and then poured it into your gun.  If you didn’t have at least two opposing teeth you couldn’t tear the package and had to put down what you were holding to do it with your hands, and in that length of time you could be killed!

Here are a few photos we took:

Yesterday we traveled deeper into Florida from Pensacola.  We’re here at the Hillsborough River State Park in Zephyrhills which is just north of Tampa.  The state park is in the middle of a swamp, so once again we are parked right next to a swamp.  Here are a couple of pictures of our campsite:

We went from Lake Charles to Pensacola to stay for a few days on our way down into Florida.  It’s a very beautiful area with a huge bay (Escambia Bay) as well as lots of white flat beaches.  The gulf coast is very different from the Pacific Ocean – it’s warmer although I wouldn’t say it was bath-water warm in December!  It’s also got very tiny waves. 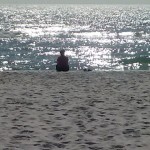 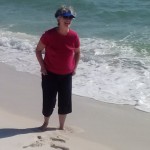 We visited Fort Pickens, which was first established during the Civil War and was the site of a battle with the Union Army taking control of that Fort and fighting the Confederates who were at two other forts at different points in the mouth of Escambia Bay.  The fort was also used in WWI and WWII to protect the bay.  It’s mosly in ruins now but most of it is open to the public for a self-guided tour.  Here are pictures Jeff took at Fort Pickens.

When we got back to the Sam Houston Jones State Park today where we are staying, we stopped on the road as we saw a couple of deer right next to the road.  We were going to take a picture or two, but then we saw a couple walking toward the deer with a bag of bread.  So, we backed up the road a little bit to watch.

The two deer saw the couple and one started to leave, but the other turned toward them and actually starting walking toward them.  The woman got a piece of bread out of the bag and tossed it towards the deer, and with a few pieces and some encouragement she got the deer to take food from her hand!  It was very cool to watch!