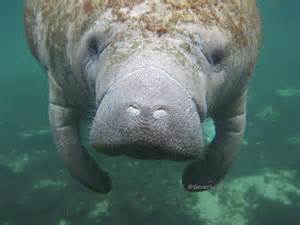 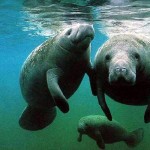 We took a short trip while in Port Charlotte to see some manatees.  Manatees are fairly common in this part of the gulf coast of Florida, and in the cold weather when the gulf waters get a bit colder they come upstream into canals and harbors where the water is a bit warmer.

We had several options to see manatees, some places even allow you to ‘swim with the manatees’, who are very calm and tame.  These places, however, are pretty expensive and require a boat trip to get to where you can see manatees whether or not you want to get into the water with them.  There are some places like Sea World where they have tanks containing captive manatees.  There was one place in nearby Fort Myers where a power plant discharging warm waters into a river attract wild manatees during the winter.  We chose to see manatees there as they are wild manatees and not captive.  We knew we wouldn’t get real good views of the manatees by watching them from a shoreline rather than seeing them in a tank or from underwater with them.  We saw lots of ‘shapes’ in the water as the manatee browsed around under water, and saw them poke their noses above the surface to breath.  Here are pictures we took at Manatee Park, near the power plant along with some underwater pictures I found on the internet to show what they look like in more detail.

To get from Port Charlotte where we’re staying to the Florida keys, we had to drive across the southern end of Florida, through the Everglades.  I was picturing this as a jungle, with large mossy trees overhanging the road and that it would be dark and perhaps scary.

Nope!  in most places it was a fairly dry level area of marsh grasses from what we could see from the truck.  Some stands of trees, many with no leaves as it’s wintertime.  Some palms, some cypress, some we don’t know the name of.  But, mostly open marsh areas.

We drove to the keys on State Route 41.  It’s a two-lane road with several airboat tour places and some small “Indian villages”.  No gas stations, no fast-food restaurants etc.

At one point I saw a fast blur darting into the road and in that split-second realized it was a good sized alligator – probably between 5-6 feet – and before I could do more than a quick “OH” we hit it.  With both front and rear tires, THUMP and THUMP!   Solid thumps like if you run over a tire on a rim on the freeway!  There wasn’t any place to pull over or turn around for more than a mile, so we couldn’t stop to see whether we killed it but Jeff did see it just lying there in the rear-view mirror so we’re pretty sure we killed it.  It saddened us but we just kept on going.

Here’s a picture I found online of an alligator walking across a road.  The one we hit was probably about this size but was moving FAST – like he’d crossed that highway many times before and knew he had to run but this time his timing was just off.  🙁 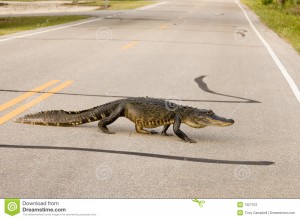 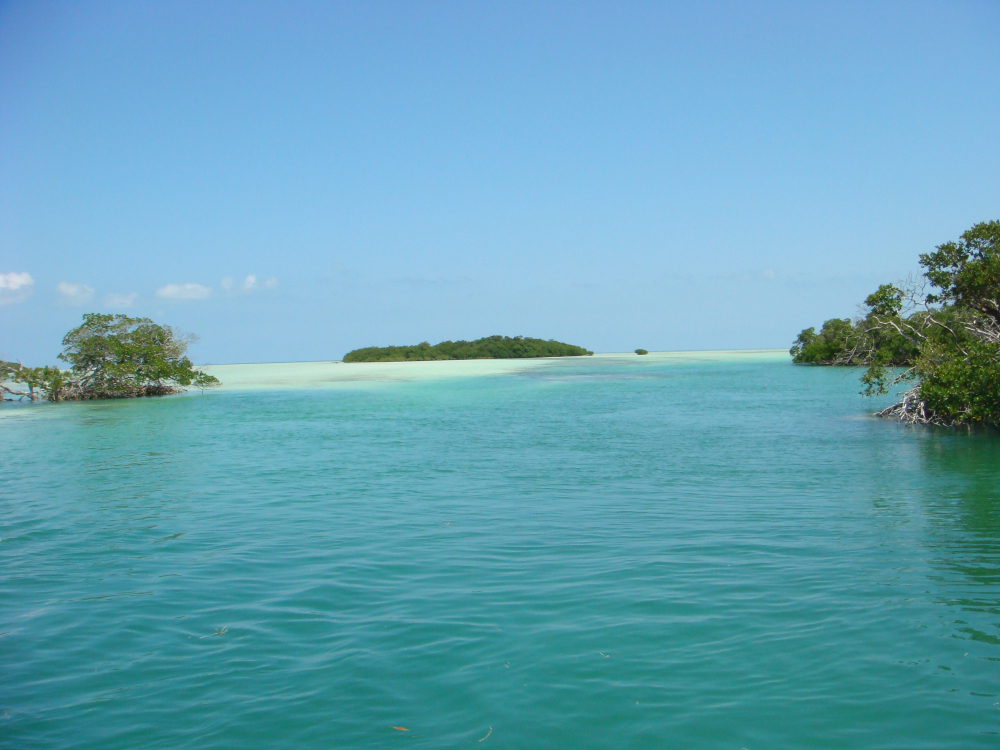 Several months ago we planned our stay in Florida because we know wintertime is the season here.  We searched the south end of Florida and the keys to find a place to stay for a while so we could enjoy the scenery and see the keys.  Alas, we were unable to find anyplace to stay that had space and would take the dog and would be under $100/day.  $100/day is just way too expensive for us!

So, we ended up in Port Charlotte on the gulf side, about 120 miles from the southern tip of Florida where the keys start.  At first we were thinking we’d make an early start and drive down and back in one day.  We ended up deciding to drive down and stay overnight at a motel that would take the dog so we would have most of two days in the keys.  That worked out pretty good.

Although our time in the keys was short, we had a great time!  We took a glass-bottom boat tour of the reefs on the Atlantic side (see separate post) and were able to see lots of fish as well as part of a shipwreck.

We also drove down to the extreme end of Key West where it’s just 90 miles from that point to Cuba.  People actually make that 90 mile crossing on rafts, small boats, etc.  I used to know a construction worker who swam the 90 miles hanging onto a log!  Yipes!

We weren’t able to take as many pictures of the beautiful water, islands etc. as we wanted.  Much of the shore is private and while driving down route 1 you can’t stop and take pictures whereever you want, no shoulder to the road!  So, the pictures below are a mix of some that we took and some that I found online that match the sights that we saw.

The color of the water was in some areas deep blue to a light blue, and in some areas was a deep emerald to a light green.  The lighter colors is where the water is very shallow and is sandy underneath instead of reefs.  And the little patches of mangrove trees standing right out in the water was so exotic looking!  In some places there would be one or a few trees WAYYYYY out there in the water but the water is so shallow all over both the gulf side and the Atlantic side that sometimes you could see people out standing up about quarter mile out in the water.  It was weird!

Here are pictures we took of the keys (or ones I found online that matched what we saw): 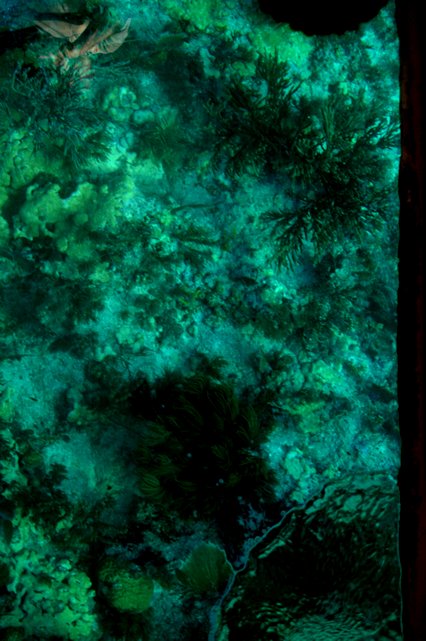 We decided to take a glass-bottom boat tour to see the reefs around the Florida keys instead of snorkeling or diving (not my cup of tea!!).  We chose the Key Large Princess tour which is a two-hour tour out to the Pennekamp State Park reef about 3 miles out in the Atlantic Ocean.

I was shocked and amazed to find that 3 miles out in the ocean the reef comes to within 6 feet of the surface!!  From the top deck of the boat looking through the wake I was able to see the bottom!  Once we got to the reef area we all went to the lower deck and sat around the railing to look through the glass-bottom.  We saw baracuda, a large grouper, a stingray, parts of a shipwreck, and lots of brightly colored small fish.  We also saw lots of living coral, waving in the water.  They looked like purple lettuce!!

The pictures Jeff took didn’t come out real good due to them being through the glass, with the boat moving and the fish moving etc.  But, here are a few, below.  Also, here’s my review of the tour: http://www.yelp.com/biz/key-largo-princess-glass-bottom-boat-key-largo#hrid:IP_OJej7LvU9QEkAk-rqXA

We couldn’t find an RV park near or on the keys that would take our dog, so our trip to the Florida Keys was driving down to it and staying in a motel in Florida City, the last town before you get to the keys.  I wanted a seafood dinner so we went to a place just across the street from our motel.  I wasn’t real impressed with my dinner, Tilapia Tropical.  The portion was large but the fish was smothered in a pineapple/mango salsa and it made the fish soggy and overpowered the taste of the fish.  Here’s my review of the restaurant: http://www.yelp.com/biz/mutineer-restaurant-homestead#hrid:Xauqgsr4vOPdPa_zr-HocQ

While on Key West, we found a dog park near a beach, so we decided to give Laddy a break from being in the car for a bit.  There was lots of shade as it was quite a warm day (low 80s in mid-January!!).  Here’s my review of the park: http://www.bringfido.com/attraction/11509/#reviews

Our RV park borders a bird sanctuary and has a walking path along it that dogs can be off-leash on.   Jeff takes Laddy there at least a couple times a day so he can run around a bit.

On several trips to the area Jeff has seen a small alligator, about 3 feet.  We took a couple pictures of it:

We stayed for 3 weeks at the Sumter Oaks RV Park in central Florida, over the Christmas and New Years holidays.  We picked this place to stay at for a while mostly because we had a lot of trouble finding an RV park anywhere in Floriday that had openings over the holidays, wasn’t REALLY expensive and also took Laddy (some RV parks don’t allow big dogs, or if they do, exclude Dobermans, Rottweillers and Pit Bulls).  Since we’re Escapee Club members, we have the option to stay at an Escapees RV park for a really low price.

We LOVED it here!  The setting is beautiful, each site is nestled in amongst red oaks with Spanish moss hanging from the branches and ferns growing along the trunk.  Our site was in a corner of the park with a pasture on one side where we saw a couple of deer and turkeys, and a cypress swamp on another side where we saw cranes often.  The cranes would stroll around inside the park as well, and often they were quite noisy!

Not only was the setting really pretty, the park was very social!  They had coffee gatherings every morning; interestingly the women sat together and the men sat together on the other side of the clubhouse.  The women said it was because the guys would get so loud!  Jeff loved visiting with the men and went to this gathering more often than I did. They also had pot-lucks, cookie exchanges, bonfires, a Christmas dinner and a New Years Eve party.

The only slight negative was the fact that we got NO tv stations!  Once in a while one channel would come in, but in a few minutes to a few hours it would fade out.  Since we weren’t here to sightsee much, we had a lot of time in the trailer without TV.  They did have cable in the clubhouse TV room, so we went there a few times for favorite shows and a couple of football games.  They had a small shelf of DVDs to borrow, so we watched some movies we wouldn’t normally have chosen.  We also rented from Redbox and I picked up a couple of movies real cheap at Walmart that we watched and left at the clubhouse for others.  We managed to get by for 3 weeks, but I’ll tell you I’m glad to be at our next stop with several channels to choose from!

While staying in Bushnell, FL we decided to try a local Mexican restaurant that had been recommended to us – Coyote Rojo.  The outside of the place doesn’t look like much, but the large number of cars in the parking lot confirmed that this was a good place to eat.  It was!!  Delicious food!!

Here’s my review of it on Yelp: http://www.yelp.com/biz/coyote-rojo-bushnell#hrid:I6C6kGgrkrLThHfYmEwZAQ