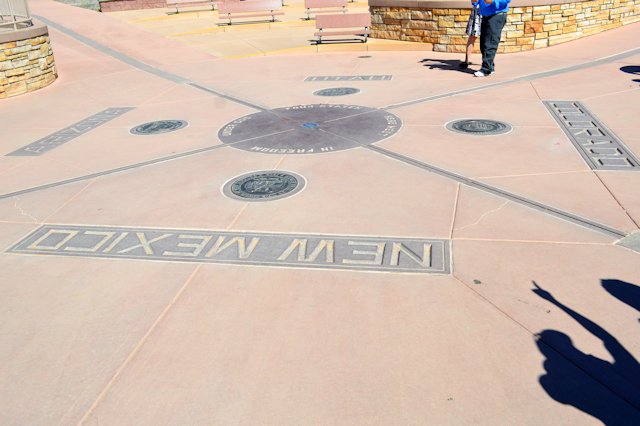 While in Farmington, NM we had to drive to the “Four Corners” – the spot where four states meet.  It’s on Navajo land and is administered by the Navajo nation and because of this it’s less developed as you might think.  There are vendors booths circling the “spot” which is a medallion in the ground.  We joined a line of people waiting to take a picture standing on the spot – Jeff took a picture of his foot on the spot!  Here’s a couple of pictures: 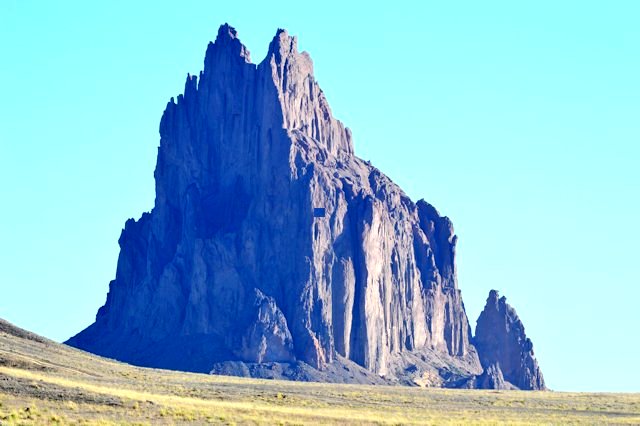 We’re staying in Farmington, NM for a few days to see a few geographic items. First is Shiprock – the most prominent geological feature of northwest New Mexico. It is awe-inspiring! It is a plug of volcanic lava that formed about 27 million years ago. The lava did not erupt through the earth but instead got plugged up and cooled and formed inside what was probably a hill. Over time the hill eroded leaving the lava plug standing exposed. In this Shiprock is similar to the Devils Tower as they were both formed when lava didn’t erupt through the earth but cooled/formed in vertical shafts inside the earth which later eroded away leaving it exposed.

In addition to the large vertical thrust of Shiprock peak, there is a rift in the earth alongside the peak where lava tried to erupt through the earth but didn’t. This has left a vertical wall of lava that is miles long. We were able to climb up the hillside to the top and peer over … on the west side of the lava wall the wind has eroded much more of the hillside, leaving a much steeper wall on the west side than on the east. In some places the lava wall is so thin that there are chunks missing giving the wall a lacey appearance.

I was much more impressed with the lava wall, called the dyke. I could imagine the lava rising through the crack in the earth trying to break through the top layers but unable to and then cooling and hardening in place.

The ancient Puebloan people say that the peak was formed when a giant eagle landed and turned to stone. From some angles the peak does look like an eagle that has landed, with his wings folded back and sticking up behind it’s head. 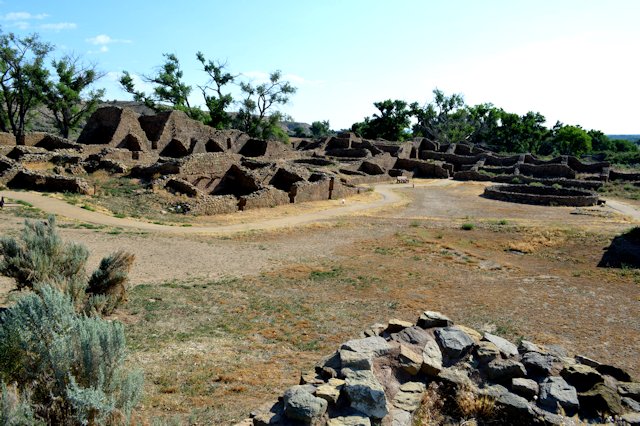 While in Farmington we visited the Aztec Ruins. They are NOT really Aztec; when settlers discovered the site in the late 1800s they thought it was an Aztec site and named it. The nearby town is also called Aztec so the name stuck. This is another example of another ancient Puebloan great house, similar to the Chaco Canyon great houses.

This great house was extensively excavated and the large kiva reconstructed in the 1920s-1930s by Lewis Morgan, who grew up in the area and became an archeologist. He took great care to not disturb items found inside the structures and there are many examples of pottery, weaving, etc. that were found. He reconstructed the kiva using modern technology but keeping it as close to the original as he could, including the colors based on remnants that he found. Using modern technology (for the 1920s) it took over 7 months to build the kiva.

One item unique to this site is that the outside walls had bands of dark green stones where the rest of the stones are light gray. It is not known why this was done.

Here are some pictures we took at the site: