3/30/2013: We found this dog park by searching online, but when we arrived and after we had paid the $2 day use fee (automated) we discovered the dog park was closed for grass maintenance.  Bummer!

To see our review of this dog park, visit: http://www.bringfido.com/attraction/10810/

4/3/2013: We were in the mood for pizza while visiting the Pismo Beach area and chose Paisano’s as we drove down E. Grand in the Grover Beach area.  WONDERFUL tasting pizza!  The toppings were crowded on the pizza (not skimpy like some places)  and the sauce and cheese were excellent in flavor.
The pizza was cooked a bit longer than at some places, but it wasn’t dry at all!  It was very flavorful and much more authentic than you’ll get at a chain.
Definitely a place to go to get good pizza!

See our review on Yelp (says the same thing as here): http://www.yelp.com/biz/paisanos-pizza-and-pasta-grover-beach

We moved on Saturday to Pismo Beach where we’ll stay for 2 weeks enjoying this area.  We’ve been to San Luis Obispo and Morro Beach before and love this area so we wanted to have plenty of time.

It’s a good thing too, as Thursday I went down with the flu, and Saturday evening Jeff did.  So the first several days of our stay here is Pismo Beach we didn’t do anything but lay around and eat toast.  Ugh!

We discovered while we were staying at the Ventura Ranch KOA that they have a zipline!  Neither of us had ridden one before and both of us wanted to, so here was our chance!  We signed up to ride and were in a group consisting of mostly kids – some were young enough that they had to ride tandem (there has to be 80 pounds on the line or it won’t go the whole distance and then the kid would be left dangling in the air!)

Here’s a photo of Jeff in the gear and ready to go: 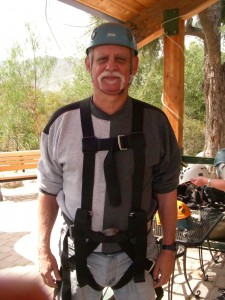 and here are a couple of Youtube videos that Jeff took, one while he was riding the zipline and one of me riding.  What fun!!